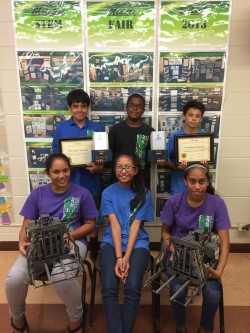 After starting a robotics program on a trial basis this year, students of Molokai Middle School (MMS) have swept the competition, placing first and third in the state. That qualifies them to compete in the 2014 VEX Robotics World Championship VEX IQ Challenge Division in California next month as well as the International VEX Summer Games in Honolulu.

“Making it to the World Tournament is a once in a lifetime opportunity,” said MMS boys team member Ilima Ka’awa-Richardson. “Since we started at the bottom, this makes things so much sweeter!”

In Hawaii’s inaugural year of VEX IQ Robotics, students use science, technology, engineering and math (STEM) skills to maneuver their robots to score points. MMS is the only neighbor-island school out of seven in the Hawaii team to be represented at the world competition.

As part of the year-long STEM program that started last year at MMS, all eighth grade students were required to construct and modify VEX IQ robots, and compete in qualifying tournaments during their class periods at the school level. Winners were chosen from the top scores of each tournament to become members of the Robotics team, of which one was for boys and the other for girls. They then competed in two state-wide qualifying tournaments, and two State Championship tournaments.

“This tournament [McKinley] was awesome, and I had the proud feeling that we really accomplished something exciting,” said Sherie.

After the MMS VEX IQ Robotics season ended in February, one of seven Hawaii slots for the Worlds opened up, necessitating the last-minute McKinley State Tournament. Having won the McKinley State Tournament, the girls robotics team received two trophies — the Teamwork Champion Award for the highest score in the tournament, and the Excellence Award for the overall tournament winner.

“We never expected to make it to state, and now we’re heading to World and International,” said Kaeo Kawaa. “These students have truly become the ‘Cinderella Team,’ and are sought after by, and in company with, nationally and internationally-ranked Hawaii robotics schools. It’s been a crazy but wonderful ride!”

Now, with Worlds in Anaheim, California April 23-26 rapidly approaching, the team is busy fundraising to make the trip possible, with estimated travel at $16,000. Since VEX IQ at MMS started in STEM classes, eighth graders are already involved in a Class of 2018 Campaign to donate $1.00 to their fellow classmates and robotics team members in their vie for World. and challenge all other MMS and MHS classes to do the same.

The team has set up a campaign at GoFundMe.com to help raise funds. Please visit gofundme.com/7kbonk to donate. Those wishing to support the team can also contact Molokai Middle School at 567-6940 or robotics@mms.k12.hi.us, or go to molokaimiddlerobotics.weebly.com.