Middle School Most Improved in the State 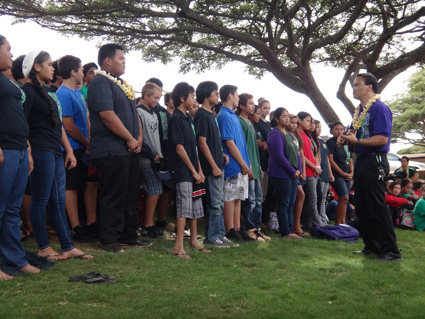 With great achievement comes great reward, and Molokai Middle School (MMS) students have certainly earned both. They were recently recognized by the Department of Education (DOE) as the most improved school in the state. Not only did they make Adequate Yearly Progress (AYP) standards for the first time since they separated from the high school eight years ago, but they made significant, double-digit improvements in both reading and math.

“It is my privilege to come here because you are the best performing school in the entire state of Hawaii,” said the Board of Education Chairman Don Horner at an academic achievement celebration assembly held at the school last Thursday. “I want to thank you for what you’ve done and what you will continue to do.”

Two years ago, Molokai Middle School was among the bottom five schools in the state, according to MMS principal Gary Davidson. Despite the many who expected them to fail, Davidson set a goal for the school –to be the most improved school in the state.

“We dream big here,” said Davidson. “Last year’s students not only hit a home run but they knocked it out of the park –they had double digit gains in every subject tested.”

With help from EdisonLearning company, an organization that helps public schools struggling to meet national testing standards, MMS students increased their math scores on the Hawaii State Assessment (HSA) last year by a whopping 27 percentage points, meeting the AYP target –which was 64 percent this year –with 65 percent proficiency. They also increased in reading by 15 percent, meeting the AYP target of 72 percent.

“When a school moves five points, it’s a big gain,” said Davidson in an interview earlier this year. “But our gains –I guarantee no other school in the state made those kinds of gains.”

MMS also thrives in areas beyond standardized testing. Their robotics team, the Molokai Golden Eyes, just won the state First Lego League championship last weekend. MMS eighth-grader Erik Svetin was recently crowned grand champion of a math tournament held at Iolani School. At a Maui County engineering competition held in February, the MMS girls’ team won the championship by building a popsicle bridge that was able to withstand 250 pounds, after which the judges ran out of weights with which to continue testing the bridge.

“We don’t just compete, we slam ‘em,” said Davidson. MMS students are currently preparing for the annual Maui Schools’ Science and Engineering Fair. Last year, MMS had more winning projects than any other school in the county, and Davidson said he expects similar results this year.

Davidson said their next goal is to be the best school in the state.

“Only in 2010, MMS was the second to the lowest in all DOE system, and within one year, the statistics show that they were able to increase in every area …You have achieved a significant milestone for Native Hawaiians in rural communities,” said Machado.

Much of MMS’ success would not have been possible without the support of the community, added Machado. OHA awarded the school a community grant for 2011-12 that was matched by Mycogen Seeds, totaling about $88,000, according to Machado. The funds were used to purchase rolling computer labs, which increased access to information and streamlined the HSA online testing, according to a written statement by MMS.

The school also thanked Molokai kupuna, church organizations, Na Pu`uwai and other local organizations in the community for their continued support.