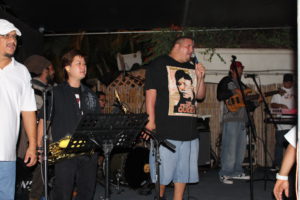 Molokai music lovers flooded the dance floor when Micah G and his six-piece band took the stage at Paddler’s on Saturday night. Guests danced and sang the night away to an eclectic mix of cover and original songs performed by the Lovers Rock Reggae artist, brought to the island by Molokai’s own Paulele Alcon and his promotion company, Hawaii’s Finest . Micah G celebrated the release of his second album, which will feature his new singles “Good Man” and “All for You,” as well as filmed his “Rude Boy Love” video. Molokai band Str8 Vibe’n also made a guest appearance at the concert.