Michael Kikukawa’s Ivy League dreams have come true.  With a list of colleges he had yet to apply for, the Molokai High School senior received an acceptance letter to Harvard this past December. The news opened a door for Kikukawa to prestigious school and proved to Molokai students that they too can find pathways to this kind of success.

“Anything worth doing is going to involve a struggle,” he said, noting the challenges he faced in pursuing his goal.

MHS Principal Stan Hao said Kikukawa’s successes exhibit what can be accomplished by setting a goal and working toward it.

“It shows that a great desire can be realized, even in a small rural community like ours,” he said.

Kikukawa said his success doesn’t have to be rare. Molokai students can achieve great things if they believe in themselves and one another.

“Coming from Molokai, we sometimes don’t expect much from each other,” he explained. “I would tell my friends and other students that they should remember to follow their dreams and persist on the path to their goals despite challenges, setbacks and the inevitable obstacles they will encounter.”

Being a leader at school isn’t enough to impress an Ivy League school, Kikukawa said, so he needed to pursue opportunities outside MHS to really stand out. 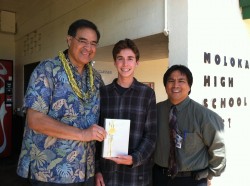 However, growing up in a remote location made holding district and state leadership roles a challenge.

“Coming from Molokai makes things harder, but it’s definitely worth it,” he said. “I had to take as many opportunities as possible and network while I was on other islands.”

His titles include MHS student body president, Hawaii State Student Council Vice Chairperson and Leo Club state council vice president. He has also been involved with a number of smaller clubs since his freshman year and interned at the Governor’s office this past summer.

Now his obstacle lies in funding his education. Kikukawa is still waiting to find out how much his education will cost, but Harvard’s standard budget for 2012-2013 academic year is listed as $62,772 on the university’s website. Kikukawa’s busy schedule makes it tough to find time to apply for scholarships.

“Cost is a big barrier,” he said. “I try to set aside time for scholarships, but sometimes I miss deadlines. I don’t want to drop any organizations because I know how important it is to be involved.”

“As a freshman I wasn’t thinking about college,” Kikukawa said. “I was just freaking about being in high school. I knew I wanted to be involved and be a citizen that contributed to the community.”

Kikukawa began thinking about his college options toward the end of his sophomore year, but he didn’t yet know where he wanted to go.

“I was at the top of my class, so I figured I should try for the best,” he said about his plans to apply for Ivy League schools. “By the end of my junior year, I had set my heart on it.”

Between applying and receiving his acceptance, Kikukawa worked to distract himself from his nerves.

“It made my heart flutter once in a while when I thought about it,” he said. “But I knew I did everything I possibly could, and if things didn’t work out there were other options.”

Kikukawa received his acceptance email Dec. 13, a month after submitting his applications.

“At that point it was the biggest thing I’ve ever accomplished,” Kikukawa said.

Harvard was it for him, he said, so he dropped the other 12 applications he was considering and confirmed his attendance.

Kikukawa has a team of supporters and role models. His mother and paternal grandparents attended Ivy League schools. He said his family has always emphasized education and community involvement and motivated him to succeed.

“I’ve learned how to seek additional knowledge and support from my peers, teachers, parents and community mentors,” he said. “As I move on to college, I hope to expand my network and to continue to apply the skills that I have learned as I tackle increasingly complex issues.”

That was exactly what Hao advised Kikukawa to do as he continued his education.

“Anything you accomplish in life will never be done alone,” Hao said. “You will always need to enlist the assistance of others to bring about positive change. However, your foundational values and internal compass will serve as guiding principles.”

Kikukawa said he also admires Barack Obama, “because of his humble beginnings and ability to unite people of diverse backgrounds,” and Sen. Daniel Inouye for his service to the country.

Hao encouraged Kikukawa to go forth and serve without forgetting his roots.

“Stand on the foundation of your family, belief in yourself and serving people,” Hao said. “These values will help you stay grounded and remind you on where you came from to aid the direction and possibilities of where you may be going.”

Kikukawa plans to study government and law, unless his major changes with his experiences.

“To my knowledge, I am the first Molokai High School student to be accepted to Harvard, and I plan to be the first to graduate from this exceptional school,” he said.