Slowly but surely, Molokai High School (MHS) is making its way toward the science building of school officials’ dreams. Since MHS split from the middle school a decade ago, students have been using classrooms that lack the amenities of a standard high school science lab. Without multiple gas- and water-equipped lab stations, students often have to gather around computers or even a single table to observe experiments.

In early 2013, the DOE and school officials began designing a new science building to change all that, and last Wednesday, project planners met another project goal. The Molokai Planning Commission approved Department of Education (DOE) requests to change land and zoning designations on the area of school property where the DOE wants to build a brand new science facility. The application will now require the approval of the Maui County Council, according to DOE Facility Planner Brenda Lowrey. 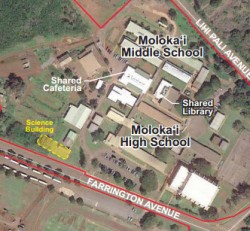 “It’s kind of like a feeling of relief,” said MHS Principal Stan Hao. “Finally we get some movement on that so our students can have that lab that they really need.”

The science building’s proposed location originally overlapped urban and agricultural designated areas. The DOE asked the Commission to change the agricultural label so that the school wouldn’t have to obtain multiple building permits.

The proposed science building will span 4,500 square feet and include two labs with eight total stations, each of which will accommodate up to four students, according to the DOE’s Draft Environmental Assessment, which details the project and its potential impacts on the surrounding community. The building will also feature environmentally friendly aspects such as rooftop solar panels and a nearby rain harvest tank.

Lowrey said construction of the building will cost a little over $3.5 million, which the state legislature will supply from funds set aside for school science facility upgrades across the state.

Raymond Cabebe, a planning consultant on the project, said that the next step involves determining whether the school needs more parking. The campus currently has 108 stalls, though Cabebe said a county analysis determined that MHS and the intermediate school should have 306 total stalls. Building the science labs would require another 16 stalls, since the county requires eight stalls per classroom, Cabebe added. Lowrey said officials are applying for a parking variance to eliminate what they feel would be 214 unnecessary extra stalls.

“We’re not anticipating a growth in enrollment because of this building, but we just have to go through this process,” Lowrey said.  “We’re hoping that the county understands that Molokai High School doesn’t need more parking.”

Cabebe said project officials hope to get on the agenda for the Jan. 8 meeting of the Maui County Board of Variances and Appeals.

Officials also decided to cut a proposed wind turbine from the project after it was met from opposition from the community. The original plan proposed the construction of a 45- to 65-foot small-scale wind turbine outside of the classrooms, as an “educational pilot project” that would also provide alternative energy for the building.

“Because it is such a controversial topic on Molokai … we just [went] and removed it from the project so we can make sure that the science building can happen,” Hao said.

With the wind turbine no longer in the picture, the only community concern was the use of a small, unofficial road that runs through the school’s property. Ho`olehua resident George Aiwohi said at the Planning Commission meeting that both residents and emergency responders use the road, and he worried that future construction would close it down. Hao assured Aiwohi that the school had no plans to fence it off.

According to the Draft Environmental Assessment, the project is slated to begin construction “in late 2014” and take approximately one year. The DOE already has a contractor lined up, Lowrey said. However, the county’s verdict on the parking issue could delay the project.

Although it’s a lengthy process that began in early 2013, Hao is already envisioning the impact the new building could have on both the science program and the campus as a whole.

“By having that additional building, it’s gonna free up two other classrooms,” said Hao. “It would allow us to move departments together, so all English could be in an area, all social studies in an area, so it really helps.”