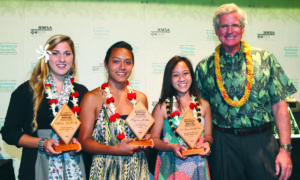 A Molokai student took top honors at last week’s HMSA Kaimana Awards & Scholarship program that recognizes scholar athletes around the state. Charisse Manley of Molokai High School was one of our distinguished Kaimana Scholars and took home a $5,000 scholarship.

“The HMSA Kaimana Awards & Scholarship Program is the only program in the state that rewards academics and athletics as well as sportsmanship and community service,” said Robert P. Hiam, HMSA’s chief executive officer.

The program started in August 2005, recognizes all-around accomplishments by high schools, rewards individual student athletes with scholarships, and supports coaches education. The program is sponsored by HMSA and administered by the Hawaii High School Athletic Association.

At last week’s ceremony, 22 students received scholarships worth $3,000. Five of those students, including Manley, were named distinguished scholars and received an additional $2,000 each.