Molokai High School tennis players Pono Chow and Kamanu Pascua went into their final game of the Maui Interscholastic League (MIL) championship match last Saturday against King Kekaulike. With one win for each team and 300 spectators surrounding the court, this final game could put Chow and Pascua in the Molokai history books as the island’s first MIL tennis champions.

“I just kept telling myself and my partner that we have to win – we just have to,” said Chow. “We played hard to the end and we won.”

Boys’ tennis coach Pono Asano said when he met with Chow and Pascua before the final game, the first thing out of the players’ mouths was “I won’t quit.”

“That mentality speaks volumes,” Asano said. “To think, ‘You want this [win]? You have to beat me. You have to take it from me. I won’t give it to you.’”

Pascua and Chow held on for a win, using a play style coach Dean Chow said brought them through the season.

“Our style is to serve and come to the net,” Dean Chow said. “Anything comes close to the net, those two would be there and they would pound them down. It’s an aggressive way to play tennis, and the other kids aren’t used to that.”

He said a combination of skill and teamwork got the boys wins all season. 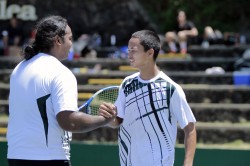 “Kamanu has a monster serve,” Dean Chow said. “When he does a good serve, the ball doesn’t come back. Or if it does come back, it comes back soft and Pono is at the net and pounds it.”

Pono Chow and Pascua were one of the four boys doubles who represented Molokai at the MIL tournament. There were also two boys singles, two girls doubles and three girls singles. Brittany Nervesa won the first round of singles and competed in the quarterfinals.

Pono Chow and Pascua entered the tournament on Maui seeded third, and an upset victory over first-seed Baldwin got the momentum going for the rest of the weekend. Asano said a barbeque and practice at a Maui tennis club Thursday was a treat for the 17 Molokai players, who normally sleep on gym floors and eat food that travels easily.

Asano said Maui schools have the benefit of year-round tennis programs, which allows players to start at a young age and have constant practice.

“They have freshman who have played since they were 5 or 6,” he said. “We have some who just picked up a racket in February, and Kamanu has just played three years.”

The tennis team practices at Kaunakakai’s tennis courts. Asano said some players wear borrowed shoes and carry borrowed rackets older than they are. They practiced serves and strategy, but what the coaches really emphasized was the mentality of the game.

“This year, tennis was only a part of it,” Asano said. “We developed a lot of character and sportsmanship in our players.”

He said because of these lessons, Pascua will carry these qualities with him after he graduates next month and be an asset for whatever he does next. Pono Chow, a junior, said those lessons mean as much to him as an MIL title.

“Besides being the first [tennis championship] in Molokai history, I really learned to work with my teammate,” Pono Chow said about what he took away from the season. Asano said these lessons especially resonate for doubles players.

“To play doubles, the critical thing is you have to trust your teammate,” Asano said. “They made a commitment from day one. They listened, they trusted their coaching, and they trusted their training. They had minimal, minimal mental breakdown.”

There are no referees in the MIL tournaments, no one to judge whether a ball lands inside or outside the line, Asano said. The players call their own games, and spectators and coaches cannot interfere. So the coaches taught the players to call games with integrity and to not lose their focus or temper when they do not agree.

With a 7-1 season, an MIL title and a spot at states, Molokai tennis has finally made a name for itself, Asano said. He hopes this will bring the sport to younger kids and lead to opportunities to play year-round on the island. Until then, the team will continue playing in the spirit their coaches instilled in them.

“We have obstacles, and it’s not really ideal,” Asano said. “Through that, what’s come out in our kids is their heart. It was an incredible experience to see their heart. Their inner strength really showed, and it pulled them through.”

He added that Pono Chow and Pascua’s victory validates their training style.

“Hard work and dedication put us through this season,” Pono Chow said. “And with it came a win.”

The two will travel to Oahu May 2 for the Hawaii High School Athletics Association [HHSAA] championship game.