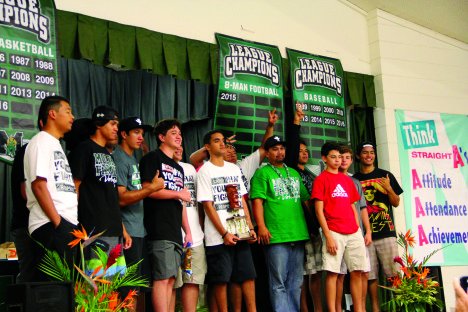 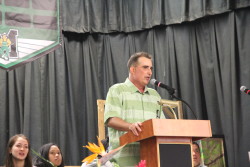 Two weeks ago, athletes from all sports in the fall, winter and spring categories were honored on stage at the Molokai High School Athletic Department’s annual banquet. Individual champions were also honored as were the Boys Volleyball runner up DII State Championship team, the MIL DII Champion Boys Football team and State Wrestling Champion Cendall Manley. Manley will have her picture placed in the MHS Hall of Fame in The Barn.
Athletic Director Lee DeRouin and his staff did an awesome job on the banquet and the awards, and everyone enjoyed a roast pork dinner prepared by Mike’s Catering.
DeRouin, commented on the past year of sports at MHS.
“Mahalo to all the student athletes, our coaches, our parents and our loyal fans for a remarkable year,” he said.
He also gave special thanks also to Molokai Drugs, Mokulele Airlines, Peter Pale and The County of Maui, Mike’s Catering and The Molokai Dispatch’s Molokai Sports Report.
Hawaii State House Representative Lynn Mokuau and Maui County Council Member Stacy Crivello were in attendance and helped give out recognition to the student athletes.
So many of the Molokai student athletes participate in many different sports during the course of the year and the 2015-2016 sports season at Molokai High School is one to be remembered. This year the graduating class has nine valedictorians and all of them were student athletes at Molokai High.