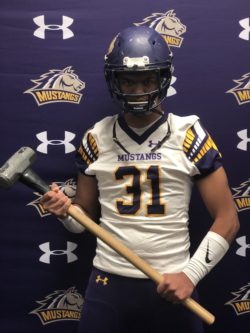 Molokai High alumnus Makani Kaneaiakala will continue and finish his college football career at Western New Mexico University in Silver City, NM. He began playing at Eastern Arizona College as a freshman in 2017, before enrolling at Tabor College in Kansas two years later. Since then, he has had some bumps in the road but is now back to the game.

“After being in the NCAA Transfer Portal for some time I can finally say I’ll be returning to action,” said Kaneaiakala. “I’m beyond thankful and blessed for another opportunity after all the struggles I’ve went through this year; it was a such a tough stretch with COVID-19, school, work, training, a potential career ending injury which healed, eligibility paperwork, and made some very tough sacrifices.”

Kaneaiakala is pursuing his bachelor’s degree while playing out his love of football. He has said his dream career is to become an airline pilot.

“…It feels great to be back and starting a new journey to the ‘Land of Enchantment,’” he said of his move to Western New Mexico University.

If you have any info regarding college sports achievements of MHS alumni, please email editor@themolokaidispatch.com to share with the community.