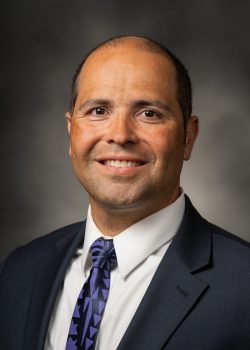 “I learned that people are what matter,” said Dr. John “Keoni” Kauwe of his time at Molokai High School, where he graduated in 1996. Kauwe, an internationally recognized researcher specializing in Alzheimer’s disease, was just named the new president of Brigham Young University–Hawaii.

Kauwe has deep roots in Hawaii and spent several years of his childhood on the islands of Kauai, Oahu, and Molokai. He currently lives in Utah with his wife and five kids, where he joined the biology department, in the College of Life Sciences at Brigham Young University in 2009 and later served as chair of the biology department. He was appointed as the dean of Graduate Studies in 2019.

Though his career has taken him away from Hawaii, his early years on Molokai left a lasting impression.

“My classmates from 1996 loved and cared for each other then, and love and care for each other now,” said Kauwe, via email. “My principal and teachers prioritized the students in wonderful ways. Earl Nakamura is, for me, the most outstanding example of this. He has nurtured the learning and success of countless students. He inspired me to be not just a scientist and teacher, but a mentor too.”

Since he moved from Hawaii, Kauwe has been looking for a way to return.

“This community had an enormous impact on my life in my youth and again over these last 10 years when I have been able to return often and renew and deepen relationships with loved ones and the ‘aina,” he said. “Those closest to me know that I have wondered about how I could come back to Hawaii while retaining my research efforts and involvement in higher education. Being asked to lead BYU Hawaii provides the perfect path to all of that. I am delighted to be back!”

Kauwe will succeed John S. Tanner, who has served as president of the BYU campus in Laie since 2015, and will assume the position on July 1.

Elder Jeffrey R. Holland, of the Quorum of the Twelve Apostles, made the announcement during the weekly BYU–Hawaii devotional, in a broadcast originating from Salt Lake City.

Kauwe said he is committed to preserving the legacy and mission of the university, of both spiritual and secular learning.

“Like many of you, I am a direct descendant of men and women who built the first churches and homes that established Laie as a community of Latter-day Saints; a descendant of the men and women who labored to build the temple that stands nearby,” he said in a BYU press release. “My heart is ‘turned to my fathers’ and I feel deeply connected to the history of sacrifice, faith, and prophetic direction associated with Laie and BYU–Hawaii.”

Kauwe received a doctorate in evolution, ecology, and population biology in 2007 from Washington University in St. Louis. He then completed a postdoctoral fellowship in Alzheimer’s disease genetics at the Washington University School of Medicine. He received his bachelor’s in molecular biology and master’s degree in population genetics from BYU. He has made important contributions toward discovering more than a dozen new genetic risk factors for Alzheimer’s disease.

In 2003, Kauwe married Monica Mortenson, who is from Provo, Utah. They are the parents of five children, who range in age from 13 to two. Mortenson earned a degree in chemistry and worked in the pharmaceutical industry before becoming a full-time mother.

Kauwe has remained in close touch with Molokai High leadership and science staff, offering research and mentorship opportunities to promising science Molokai students — something he said he plans to continue.

“My relationship with MHS never ended and it won’t any time soon,” he said.

Brigham Young University–Hawaii is the preeminent international center of learning in the Pacific. Its small campus is a unique laboratory of intercultural leadership development, where a diverse population of 3,200 students representing over 70 countries live, study, and work together, according to the BYU release.