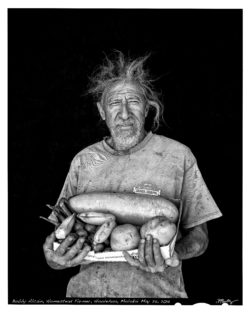 PF Bentley grew up in Waikiki in the 60s and 70s and first came to Molokai in 1971 while a student at UH Manoa.  He graduated UH in 1975 with a B.Ed degree while working his first photography job at Sunbums Hawaii shooting music concerts for the publication.  In 1976, Bentley moved to San Francisco and later to New York for photojournalism opportunities, eventually returning home to Hawaii.  He’s lived on Molokai for about 12 years now.

For 20 years, Bentley was a photographer and special correspondent for TIME Magazine.  He now shoots mainly for Hana Hou! Hawaiian Airlines Magazine. As a photojournalist and documentary filmmaker, Bentley covered domestic and international politics and was the first photojournalist to photograph on the House of Representatives floor in the U.S. Capitol while in session.

Bentley was in New York in early September 2001 after producing his third ABC-TV Nightline show.  He returned to Washington on Sept. 11, 2001 for Newsweek Magazine to be with lawmakers behind the scenes on Capitol Hill after the terrorist attacks. Included in this coverage was his widely acclaimed photograph of President Bush in prayer before speaking to a Joint Session of Congress.  Bentley has covered every presidential campaign and photographed every serious presidential contender from 1980 to 2000 including Ronald Reagan, Jimmy Carter, George Bush, Bob Dole, Michael Dukakis, Walter Mondale, Geraldine Ferraro, Jesse Jackson, John Glenn, Al Gore, Dick Gephardt, Bill Bradley, George W. Bush and Bill Clinton.

He also traveled extensively to cover some of the world’s most closely followed political events, making eight trips to Fidel Castro’s Cuba and 16 trips to Haiti to photograph chaotic political turmoil.  He covered the collapse of the Noriega regime and the ever-changing political landscape in Panama; Kim Dae Jung’s return to South Korea; and the Christian campaign in El Salvador (during which he also spent time in the mountains with anti-government FMLN guerrillas). His work has taken him to China, Japan, Vietnam, Thailand, Hong Kong, Papua New Guinea, Kiribati and Europe.

In 1992, Bentley was behind the scenes for 10 months with then Gov. Bill Clinton on his journey campaigning for the presidency.  Bentley was there, too, during the Clinton presidency, on Clinton’s Inauguration Day, his last week in office and his last trip on Air Force One.  Bentley’s book, “Clinton: Portrait of Victory,” received critical praise for capturing the soul of a politician during hectic and historic times. During the early part of 1995 Bentley documented Newt Gingrich’s first 100 days in office for TIME.  Producing a book, “Newt: Inside the Revolution” was based on that assignment.  PF’s photographs of political figures and everyday life are admired for his ability to capture intimate moments.

When asked what he thinks about when he’s about to shoot an image he said, “I think about whether I have the shot in focus. It’s a simple act without much other thought. The pictures do the talking.”