What is your name and connection to Molokai? 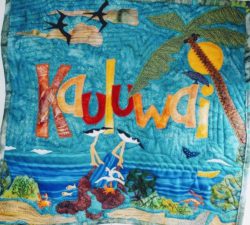 My name is Nan Walters. I came to Molokai and the Yamashita family as a young wife and new mom in 1978.  I had my second child here and then ended up as a single mom.  Thinking about raising two boys on Molokai versus the mainland, there was no question, so we stayed.

How did you make a living?

My first job on Molokai outside the home was with the startup shrimp farm called Orca Sea Farms.  I was the farm administrator for four years.   I worked with biologists and computer programmers.  It was really fun.  By then, my boys were about 8 and 10.  I was a single mom on a budget, and there was no place to go if you wanted to get a hamburger with your kids.   So I got this great idea.  “I’m gonna build a hamburger shop on Molokai!”  And against all odds, it happened.  There was an old building in Kualapu’u called Yoshi’s Sweet Shop.   I converted it into the Kualapu’u Cookhouse.  It became an amazing place.  We were open six and half days a week and full house all the time.   That took me to 1996 when I married my second husband.  He was a Montana boy here to build the Molokai landfill.  We got married and went to Montana.  I lived there for 10 years and built a second cookhouse.  My restaurant was the Big Spoon in Bigfork, Montana.   That marriage didn’t work out.  I missed my kids, and I missed this island.   I moved back to Molokai in 2006.  In 2009, I had the opportunity of leasing Mahana Gardens so I spent 10 years turning that into a beautiful, full service plant nursery.   Then I retired and moved here to Kalae.

Tell us about your art. 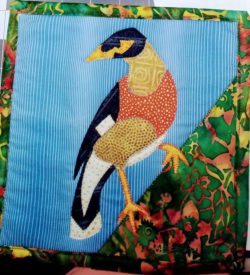 I have been in love with fabrics since I took sewing classes in my freshman year of high school.  From then on, I made my own clothes.  I always had unique clothes.  When I moved here, I developed a line of paniolo cowboy shirts with ginghams, tropical prints, yokes and cuffs.  I did a lot of weddings.  I collected a lot of fabrics.  I still have fabrics from forty years ago.   But with the cookhouse and the gardens, I had no time to do what I really wanted to do, which was art with fabrics.  So now I have the place, the fabric and the perfect opportunity to do what I want to do.  No traditional anything.   Just my artwork in fabric.  I am just really humbled about it.  I love the process.

What do you plan to make for the Exhibition?

I have some neat ideas.  My son Todd is involved with the monk seals and my heart is involved too.  So I want to do a project with monk seals.  I am interested in making a lot of my little things that represent Molokai. I find my inspiration everywhere I look on Molokai.