Papohaku sand dunes protect the water from runoff and nearby homes from high tide swells. Now the system that guards so much could receive some protection from human threats. The Department of Land and Natural Resources (DLNR) proposed increased protection for the Papohaku dune system. While the changes will not likely bring enforcement of stricter development rules, officials said they hope the protection would raise awareness of the dunes’ value. 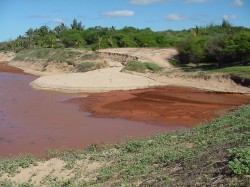 Red dirt flows into the ocean where dunes were demolished on the west end of Molokai.
Photo contributed by Arleone Dibben-Young

A 500-page document dedicated solely to the preservation of the dune system at Papohaku stresses the environmental and cultural value of the system. Molokai wildlife biologist Arleone Dibben-Young, who served as a consultant for the preservation plan, said these dunes shelter homes from high swells and shield the ocean from red dirt run-off that comes with rain from the mauka regions.

Tensions were high at a May 10 public hearing where DLNR representatives presented a proposal to take the dunes from the lowest level of conservation protection to the highest. Some testifiers expressed their concerns that DLNR was infringing on Native Hawaiian rights. However, Samuel Lemmo, DLNR Office of Conservation and Coastal Lands administrator, said the change will mostly affect homeowners in the area.

“It doesn’t change that much, practically,” Lemmo said. “It basically minimizes the potential for misuse.”

He said it will prohibit landscaping the dunes unless it is done for the good of the dune, such as cutting back Kiawe or planting native grass that will hold the sand in place. He added that DLNR officials will work with homeowners toward dune preservation.

Dibben-Young said she worked with residents on dune restoration projects along Papohaku Beach, but during these projects, she also saw a few homeowners illegally destroying the dunes. The result was large amounts of run-off entering the ocean and homes left exposed to ocean changes. This experience led to the Papohaku Sand Dunes Cultural and Natural Resources Preservation Plan, which University of Hawaii-Manoa students put together.

Alex Roy, planner for the Office of Conservation and Coastal Lands, said the dunes are currently in a DLNR conservation district, but classified as a general subzone. The change will take them into a protective subzone and limit development in the area.

“[Protective subzones] are the areas of the upmost importance for the state for natural and cultural resources,” he said.

Richard Westland, president of the Papohaku Ranchlands Homeowners Association, said in his testimony that based on the feedback he received, homeowners all want to protect the dunes.

“But it doesn’t do any good to layer another bureaucratic protection, because we haven’t seen the enforcement,” he said.

Lemmo said even if the zoning change does not result in much changed behavior, he hopes it will change the community view of the dunes so more people will take responsibility for them.

DLNR is receiving written testimony on the proposed changes until May 30. Lemmo said there is not a timeline yet on when the decision will be made about the zoning change.

One Response to “Maximum Protection, Minimal Change at Papohaku”