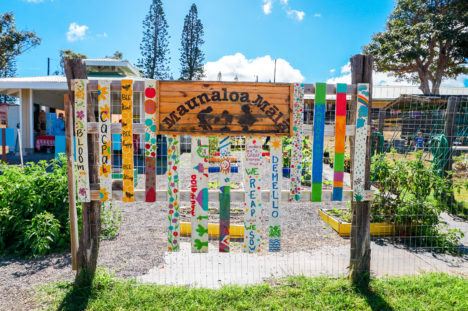 Since dreaming of a Maunaloa School garden for years and digging their shovels in the ground for the first time in a blessing of the space just over a year ago, the Maunaloa Mala – the school’s garden — is now flourishing. Each class spends time in the garden twice a week, incorporating lessons into hands on learning under the outdoor hale. At a fourth quarter Ho’ike to celebrate their progress in the garden last week, the school community enjoyed lu’au stew made with kalo grown by students, while keiki presented their recent work to ‘ohana and friends.

From calculating how much paint was needed for the hale to researching and planning water catchment and irrigation, students have been involved in every step of the process, said Principal Alison Place.

“The students have worked really hard this quarter solving problems,” she said. “They’ve identified some issues and problems in our community, on our island, in our school and they have worked to problem solve it. Some of them have talked to experts in the field to find out what we should do. They’ve created things, they’ve come up with findings and recommendations and I hope you will ask them questions that you have… because they have so much information to share with you.”

After the hale was built, one student noticed something was missing: there were no rain gutters on the structure. 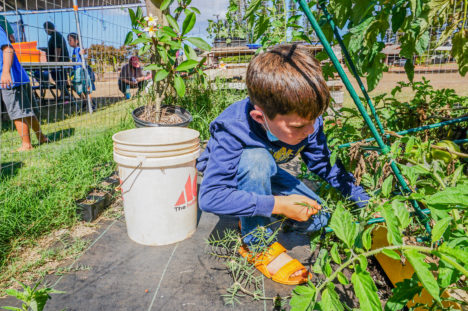 Kalilikane worked with his classmates to develop a water catchment plan, talk to experts for information, present their plan to Bayer and Maui County, and received a $1000 grant from Bayer as well as a water catchment tank donation from the county. He said local gutter maker Gene Spencer committed to donating about $2,000 in equipment and labor to install the gutter system in the near future.

“I wanted them to know the water cycle and preservation of our natural resources and we all learned how we get our water,” she said. Coming from Molokai Ranch’s Well 17 in central Molokai, Maunaloa’s water is piped to the west end. Prior to 2017, it ran through the irrigation system and had to be filtered to be potable again but it now runs through a separate line, according to students who researched the topic.

“Our watershed provides water that supplies fresh water to our entire island population,” said sixth grader Kapili DeKneef. “We get our water from Well 17. We need to show aloha for our island or else we will lose our resources. Just by doing one small part such as collecting rainwater and using it to water our school mala is just a small part that I can do to show love for my island and its resources.”

The school has also launched a community compost program. 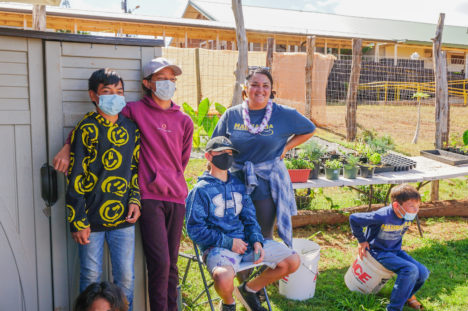 “We wrote a letter to Ace to donate bins to us and we’re going to give the bins out to people who sign up,” said Sophie Socher, third grade, explaining their composting program. Maunaloa residents can sign up, fill their bucket with food scraps to be picked up by students on a designated day, and it will be transformed into compost at the school.

Rhyzen Morris, fourth grade, also shared he and his classmates researched sanitary landfills, in which trash is contained underground in tank-like structures until it has degraded, which is safer for the environment. Students also studied the ahupua’a system.

“We learned that the old Hawaiians used to build a gate [in fishponds], the small fish and used to go inside, there was plenty of food inside the cage, they ate and ate and then they couldn’t get out of the cage,” said Morris.

With the garden flourishing and students engaged in hands on learning, Principal Place said the food grown by students goes home to their families. Eventually, she’d like to grow enough to be used regularly for meals in the cafeteria, she said. Maunaloa residents are involved, too, coming out to help during community work days during which they constructed a fence around the garden, spread gravel, helped with kalo harvest and planted fruit trees.

The school is also currently seeking to hire a garden manager to oversee the garden and support teachers and students in its management.

“It’s definitely been a labor of love and everybody is involved,” said Place of Maunaloa Mala. 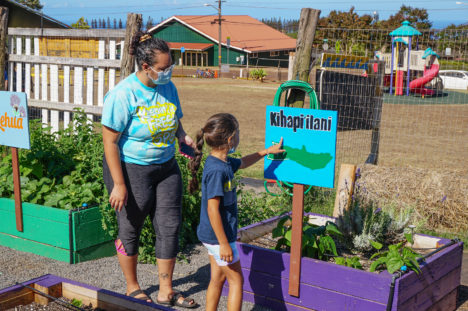