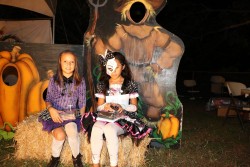 Free food included chili, grilled hot dogs and popcorn. Attendees were given drawing tickets for little teddy bears with “Jesus Loves you” at the prize booths, and Trinity Broadcasting Network donated Children’s DVD’s, bibles and pens. Shoes were given away to keiki in need. The prayer team was ready for those that needed prayer at the prayer booth. At the game booths, the kids went to and fro among the carnival style games being offered with candies given for participating win or lose. A bouncing castle was also set up for the energetic.

A costume contest included categories of “most beautiful,” “creative” and “scariest,” all of which had a biblical scripture referenced and read.

A photo backdrop was set up with bale of straw hay, scare crow and pumpkin cut outs for picture taking.

Entertainment included Kala Juario and Raymond Hiro, a Praise and Worship Team from Oahu led by Bishop Barry Naone and Hula Halau “Ho`omana O Pu`uwai,” and “The Men of Worship” closed the evening off led by Vaai Seumalo and accompanied by Patrick Hiro, Raymond Hiro.