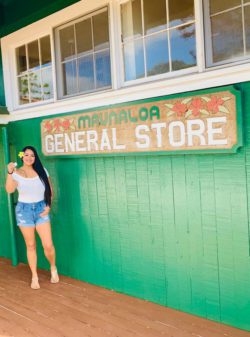 After almost two years of closure, the Maunaloa General Store will be opening its doors this week under new management. Jana Sasada, who also owns Haleola Essentials Boutique and Gift Shop in Kaunakakai, will be holding a grand opening in Maunaloa this Friday.

“I don’t know how residents survived two years without a grocery store,” she said. “I have a lot of ties to Maunaloa because throughout my whole middle and high school years, I lived there…. I got my first job in high school working at the cinema, I always had good feelings up there.”

She said the store will have “a little bit of everything,” with food, snacks and drinks, fishing and camping supplies, baby necessities, household goods, natural healing remedies and other basics.

“It’s a really good feeling for me to know residents are going to have access to essentials and food – it’s not going to be anything extravagant but having access [is important],” she said.

Sasada said she has watched community members catch the MEO bus for the 17-mile trip to Kaunakakai, go grocery shopping, and haul all their supplies back to Maunaloa. Additionally, she said a lot of people camp on the west end, and her store will “give them access to things they might forget.”

All the store’s employees are Maunaloa residents, too. Sasada said so far, she has five part time workers “until we can afford more.”

Opening a store during the pandemic has been no small feat. Sasada said she left her previous job as a prevention educator with Alu Like – where she worked frequently in Maunaloa — to open Haleola Essentials right before COVID-19 hit.

“I started this store in town with a tiny budget, no partners, no loans,” she said. “I barely had anything on the shelves, it started with very little.”

While she originally opened as a niche boutique, the pandemic forced her to diversify, she said.

“When COVID started, we had to think of ways to make it successful so we ended up adding groceries, we got approved to accept EBT, and more people started realize the variety of things in the store,” she said. Social media posts and word of mouth helped spread the word and she said she feels like “COVID actually helped us.”

She took the leap to open the Maunaloa store because “I felt like there was a need and felt like it was worth giving it a try.”

“It’s still kinda scary,” she admitted, saying she invested the money from Haleola into opening the new store, again with no loans or business partners. She said she didn’t realize how challenging running a business in Maunaloa is, however.

“Even something as simple as getting insurance was hard because there’s no fire station,” she said. “[Insurance costs] quadruple what I pay in town. These are the little things deter people from starting something in Maunaloa.”

But she said so far, the response has been heartwarming.

“I didn’t realize how much people appreciated the fact that we’re going to open it back up and give it life,” she said. “Out of everything that is happening right now, that’s the most important thing — reviving the town.”

It took a few months to negotiate a lease agreement with building owner Molokai Ranch and she got the keys Nov. 1. With a grand opening of Nov. 12, she said the quick turnaround has meant a lot of long days and nights working to ready the space, which she said wouldn’t have been possible without the help of her sisters, husband and other family members.

Since the previous owners of Maunaloa General Store closed early last year, Sust’aina ble Molokai has been using the building as a hub and they’ll be moving next door to continue operations, according to Sasada. She said she hopes more businesses will start to open and “gain traction,” adding that Molokai Ranch has more space available to rent in the town.

Maunaloa General Store has a long history of business, first opening in the 1930s, owned by the Yuen family, when Maunaloa was a bustling plantation town. Most recently, John Pele operated the store from 2006 to 2020.

For Sasada, owning the store is something of a homecoming. She said she’s happy being back in Maunaloa, which holds so many good memories for her. She and her siblings grew up with her mom in the town’s low income housing. Though Sasada moved away after high school and didn’t return to live in Maunaloa, her mom — who passed away in 2013 — later came back to that community.

Starting Friday, Maunaloa General Store will be open Monday through Friday 9 a.m. to 6 p.m. and Saturday and Sunday 8 a.m. to 2 p.m. The store’s number is 808-552-0005. During its grand opening, every purchase will be entered into a giveaway, and gifts will be given to the store’s first customers.