Something special is sprouting in Maunaloa. Last week, Maunaloa School students, staff and community joined in a groundbreaking and blessing of a new school garden with its roots set in a vision of hands-on learning through cultivation and community partnerships. The $50,000 project, called Maunaloa Mala, will encompass about 23,000 square feet on school grounds and form the basis for a new curriculum that school leadership hopes will inspire students to see their full potential.

“What it means now is kind of a revitalization, not just for the school, but also for the community,” said Alison Place, Maunaloa’s temporarily assigned principal. “We want it to be an outdoor classroom… The goal is what they’re learning in the classroom can be applied in the garden.” 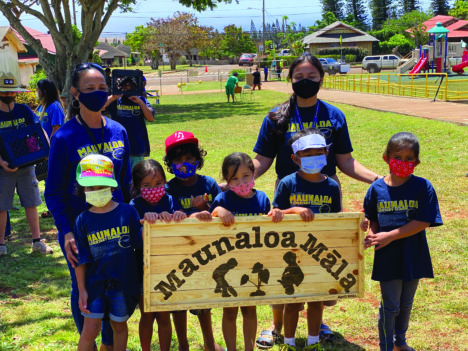 Maunaloa Mala will include hydroponic and aquaponic agriculture for vegetables, fruit trees, kalo and an outdoor hale for instruction.

Staff member and former Maunaloa student Kristina Cacpal said the school’s “gardening journey” started several years ago, when they began a garden that blossomed under various programs and through community partnerships. Starting a larger, dedicated space for growing soon became a dream of students, staff and community. She said teachers told students to “dream big” when it came to planning what they wanted to grow, and with the help of community plant and supply donations as well as local organizations lending a hand, that dream began to become a reality.

“The idea was to be a place for outdoor learning, sustainability, community involvement and where everyone could come to share their knowledge, and, of course, food,” she said.

But plans came to a screeching halt when the pandemic hit, then last season’s drought brought herds of starving deer, she said.

The dream persevered however, and last Thursday, a representative from each class of Maunaloa School dug their shovel into the dirt and turned it in a ceremonial groundbreaking of their new garden as alumnus Cameron Hiro said a blessing.

“We are excited about our upcoming projects… we will be planting lettuce, kale, swiss chard and watercress,” said event emcee and sixth grader Kai Silva. “In addition, our garden will have kalo, cabbage, eggplant, tomatoes, sweet potatoes and cucumbers along with a variety of fruit trees. We will learn to plant, harvest and prepare food for our families and community.”

An ulu tree was also planted in memory of former student Logan DeMello, and the garden was dedicated to longtime school principal Joe Yamamoto, whose vision sparked the project from the start.

Place said a special project-based curriculum is being developed specifically for the school and teachers will have a week-long training for the new learning model in June.

“We’re all learning alongside the kids,” she said. “It’s been the dream and vision of the school and Mr. Yamamoto for many years.”

Marshall Joy, Molokai Farm to School Coordinator under UH’s College of Tropical Agriculture and Human Resources, is one of the partners Place said has been “instrumental” to the project.

The Farm to School program is made up of three focuses: local produce served at schools, nutrition and agriculture education and school gardens, said Joy.

“The garden is the most important part, as it serves as the outdoor classroom that incorporates not just agricultural lessons but nutrition education through tastings and produce safety,” he explained, via email. “Inquiry based learning guided by the Hawaiian value of malama aina. But most importantly, the ability to cross cut math, science and language arts lessons into the garden…. Cultivating the aina is inherent for our Molokai keiki and that relevancy makes the school garden one of the most powerful learning tools.”

To help inspire students to see how the garden could kickstart their futures, staff wrote futuristic news stories from The Molokai Dispatch in 2031. These included “Maunaloa students win the state Championship Stir Fry Food Truck Challenge for the 4th consecutive year,” and “Maunaloa School exemplifies community food systems by celebrating their 5th homegrown May Day lunch.” Another story read, “Maunaloa School alumni Journie Rivera, has returned to the school in a unique way, she and her family opened a small restaurant in the old general store building and source much of their produce from the school farm.” Yet another highlighted a student going on to own his own thriving landscaping business that began, “Maunaloa School Alum Ashtin Kalilikane recalls that 10 years ago as a fifth grader at Maunaloa School, he got interested in the basics of irrigation and landscaping…”

“Maunaloa has a rich agricultural history from pakaa’s gardens of uala feeding thousands, to the plantation days of pineapple and plantation yards filled to the brim with most deli table tropical fruits,” said Joy. “The Maunaloa Mala is going to be one of the jewels of the state and I’m proud to be a part of this project.”