Maunaloa and Kilohana Schools Among Best in State

Molokai has one of the smallest populations in the state, but that population is home to two of Hawaii’s best public elementary schools, according to a state-wide school performance program.

Based on scores from the 2013-14 school year, Maunaloa and Kilohana ranked within the top five percent of Hawaii public schools in the DOE’s Strive HI program, which reviews school performance through the four categories of achievement, student growth, readiness and gap rates. On Oct. 16, the Department of Education (DOE) recognized both schools with two $15,000 checks. 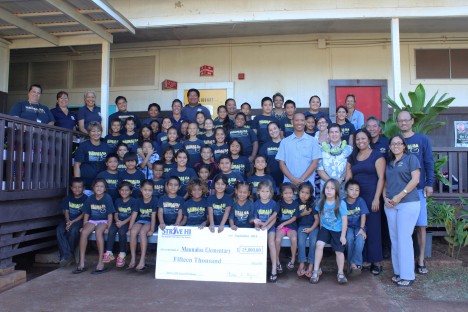 Maunaloa Elementary students and faculty pose with their freshly awarded check, along with DOE officials Lindsay Ball and Jessica Worchel (with leis). Photo by Colleen Uechi.

“To have two coming from Molokai, it’s a phenomenal accomplishment,” said Jessica Worchel, the DOE’s Special Assistant to the Superintendent. “… I think [it] gives energy to the rest of the state to say no matter what obstacles or challenges you face, you can have high student achievement.”

Fifteen schools throughout Hawaii were selected to receive checks from the DOE. Ten came from Oahu, two from Molokai, and one each from Hawaii Island, Maui and Kauai.

According to Complex Area Superintendent Lindsay Ball, who came from Maui for the check presentation, the achievement portion of Strive HI ranks test scores in math, reading and science. The DOE also takes into account student growth, which compares academic improvement amongst similar students; readiness, which records attendance; and the gap rate, which gauges how well schools close the distance between high- and low-achieving students. The gap rate category does not apply to Maunaloa and Kilohana, as their enrollments are so small, Ball said. Maunaloa has 52 students, while Kilohana has 68.

The maximum point total from these categories is 400. Kilohana scored 361, nearly tied with Maunaloa’s total of 362.

“It gives you confidence in that you’re doing the right thing,” said Lani Sawyer, a 12-year educator’s assistant at Kilohana.  It was also a vote of confidence for Maunaloa, which community members fought hard to save after the Board of Education recommended closing the school a mere three years ago to save money. 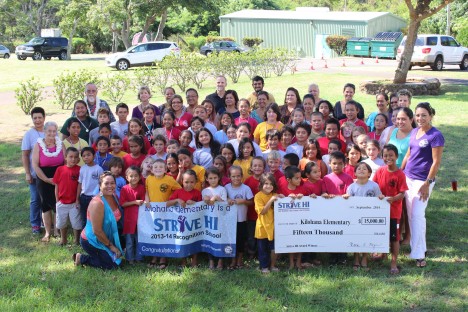 According to Kilohana principal Richard Stevens and Maunaloa principal Joe Yamamoto, both schools will be cashing the checks toward student curriculum, technology and other materials that teachers may require. Maunaloa received a $75,000 check last year, the first year the DOE used the four-part Strive HI program. Before that, the DOE measured schools through a program called Adequate Yearly Progress (AYP) that ranked schools solely by their test scores. Stevens said that Kilohana has earned recognition with AYP since 2006 and has also previously earned a check from the DOE for $12,500. Pushing students to achieve such goals, he said, is made easier by the kids’ attitudes.

“They come to us motivated,” said Stevens, who’s been at his post for five years. “You know kids love to learn, and if you’re willing to let ‘em go, the motivation’s already there.”

Worchel explained that the DOE is continuing to make changes in its school evaluations. Next year Hawaii students will take a different, “more rigorous” assessment test, and Worchel said schools shouldn’t be alarmed to see a drop in scores next year. Schools like Kilohana and Maunaloa, however, are already challenging their students to reach new levels.