Danny Mateo’s time as Maui County council chair ended at noon Jan. 2. The next minute he started his work in the Mayor’s office as an executive assistant and liaison for the county and State legislature.

“Retirement for me is not in the immediate future,” he said over coffee at Kanemitsu Bakery Saturday. “I still have a lot to offer. As long as there is fire in the fireplace I will continue what I do.”

This means Mateo will continue to be a voice for the people of Molokai and work to improve the island, something he did for 10 years as a councilmember before he reached his term limit.  During these 10 years he was a driving force behind projects such as the Kaunakakai fire station, Maunaloa community center, new public works base yard, Molokai Humane Society, Alu Like’s Kahua Ola Hou program and many more improvements to the island. 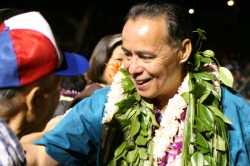 When Father Damien Church, Hotel Molokai, the credit union and other businesses needed help meeting permit requirements, they called Mateo. When Kuha`o Business Center risked losing funding, Mateo helped get them under County care. He brought the Molokai Immigration Office into the twentieth century by replacing their typewriters and paper filing system with new computers.

He spent his weeks in Maui and came home to Molokai on the weekends, spending Saturdays in his office in Kaunakakai so that he could be approachable.

“It’s nice to be able to say that when the people needed help… I was a source they could easily access and would get things done,” he said.

Mateo said he likes working efficiently and effectively, so he’s still getting used to the administrative side of government.

“It takes too damn long,” he said about getting things done in government. “I’m still results oriented, and you have to go through all these steps because that’s how you justify using taxpayers’ money.”

Being a councilmember took patience too, however. He said it takes a while to gain people’s trust and really get the hang of the job, and there is a short period of time to get a lot of things done. If it weren’t for the five-term limit, Mateo would still be in his council seat, continuing some of his unfinished business, including the county acquisition of Morris Point, an east-end beach area popular amongst locals and tourist. He said the term limits don’t make sense in a small district, especially since councilmembers must run every two years, allowing voters to replace council members at will.

Mateo’s first election was the only time he ran opposed. He worked as an executive assistant to Council Chair Patrick Kawano, who he considers his mentor, for five years. When Kawano died in 2002, Mateo took his seat. He ran for the position in the 2002 election against six opponents, including current County councilmember Stacy Crivello. He was unopposed in his other four elections.

He continues to commute to Maui each week like he has since he began working with Kawano. He looks forward to the weekends, when he comes back to Molokai, a place he’s called home since 1974.

“Molokai is where aloha lives,” he said. “And for us it’s not a commodity; it’s a lifestyle.”

Mateo is fighting for his island to receive money and resources for improvements, because he believes Molokai has to keep moving forward. He has also spoken against proposals currently in the county council that would increase water rates by fiver percent and raise the cost of new water meters to $12,000.

“The island needs to grow,” he said. “As-is, there is a limited future for our people.”

He said agriculture is Molokai’s future, and he also dreams of creating a facility where hula allows island culture and history to come alive while drawing in visitors with respect for aloha spirit.

Mateo reflected on his time in office and decided one of the accomplishments he is most proud of is giving Molokai a strong presence in the county council.

“I often use the metaphor of Cinderella Maui and the stepsisters – Molokai and Lanai,” he said. “I tried to change that so we’re all treated equally.”