Wonder Woman beat a honeybee, and a fisherman beat a braddah. Why do folks from Molokai and abroad come together as wacky characters every year? The Master Blasters canoe race, of course.

In the 24th annual Master Blasters race, Molokai residents stepped into well-crafted costumes and paddled their way to victory. The race included its usual twist twist: one beer for each of the four stops along the six-mile course.

For all of its festivity, the race is still taken seriously by seasoned competitors and officials. There were four official boats on hand in the water, and a fire truck and ambulance followed the race in case of emergencies. Luckily, the good times have held out – race organizer and President of the Molokai Canoe Club Liko Wallace said these safety precautions have never been used. 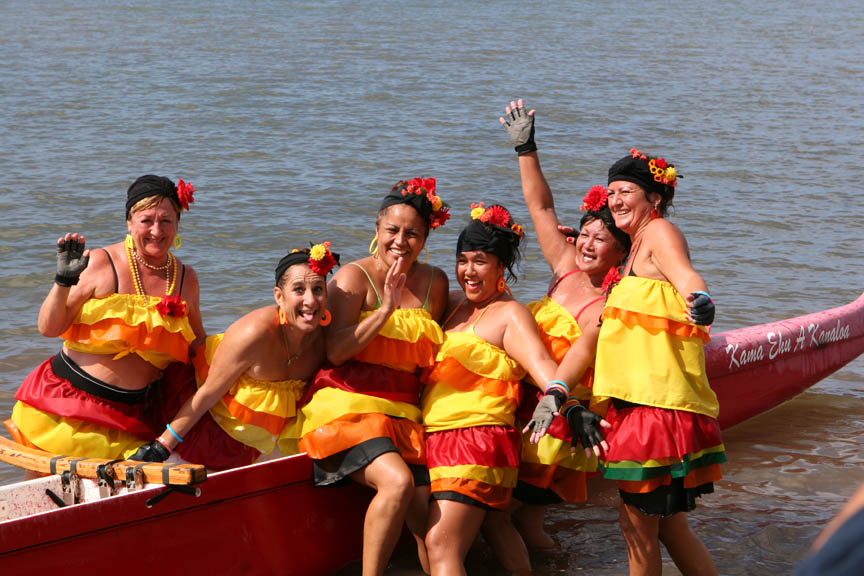 Waiting for last Saturday’s race to start at Kawela Rice Patch, the paddlers milled around, joking about their costumes and posing for pictures. The canoes were waiting too, unrigged. As the start was announced, teams slugged their first beer, strapped together their canoes and slid them into the water.

At each of the four stops, teams return to shore to chug another beer. Phifer said the proper technique is to hold the can above your head and drink it straight down. Most of the paddlers chose light beers as beverage of choice.

Team Aloha dressed as fishermen this year and were sponsored by Kualapu`u Cookhouse. Another Molokai team, Poi Dog, was appropriately sponsored by Paddler’s Inn, but did not appear in costume. Other mens’ costumes included jesters and cowboys.

On the wahine side, teams appeared as superheroes, salsa girls, angels and honeybees.

“The paddling is so second – the rest is all about the costumes,” said a member of the Superheroes, dressed as a Greek goddess.

“I can’t do this in Honolulu. I’d get arrested!” gibed Billy Rees of Team Hi Hoe Silver from Honolulu, referring to the race’s drinking challenge.

As the race neared its end, a fire truck stood at the ready – with an arch of water to spray the teams as they rounded the end of Kaunakakai Wharf. It’s something the paddlers look forward to, Wallace said. Malama Park served as the finish line, as well as the site for the celebrational party.

Winners Circle
The Blasters race also featured a Go Green theme this year. The costume contest winners, the Superheroes and the Braddahs (dressed as nerds) won beer-bottle-capped earrings for the women, and visors made of beer boxes for the men.

On the women’s side, a half–Molokai, half-Oahu team, Team Tamuretes, came in first – without a costume, but with a look of worn-out exhilaration on their faces. The Superheros came in second, made up of Molokai and Oahu team members. One paddler from Oahu, Alika Horner, said it was important to have half the team from Molokai.

“We wanted to join in” the Molokai tradition but not intrude by being outsiders, she said. Third place went to the Honeybees from Maui.

The two winning teams, the Renegades and Tamuretes, each won a grand prize: a gallon of dried squid, worth a few hundred dollars.

“It’s about comradery, the party at the end. Its not based off of winning the race,” Wallace said.

Philur agreed, “It’s a fun race. We have a good time after the regular season is over.”