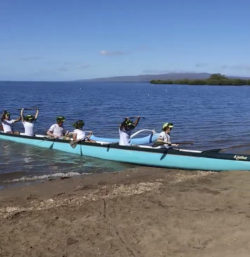 A smaller version of the iconic annual Master Blaster paddling race was held last month, dubbed the Molokai Canoe Club Master Fun Race. Unlike previous events that often featured more than 30 crews, most of which came from off island, the Fun Race had just five crews, all from Molokai, said organizer Liko Wallace of Molokai Canoe Club.

“[Master Blaster] is normally our one and only annual fundraiser but because of the situation with the airlines, there are not enough flights to share with off island residents,” said Wallace. “We had taken a stand to consider our community more important than these events [large annual canoe races]… I spoke on behalf of not having the races this year for that reason so I honored that same commitment here.”

Wallace said she felt holding the traditional Master Blaster race would “interfere with our community’s ability to have flights available” based on the number of paddlers that usually visit for the event.

Instead of being a fundraiser for the club, this year’s race fee covered lunch and music at the canoe shack afterward as a community give-back, Wallace said.

The race still featured the dual sport elements of drinking and paddling that make the Master Blaster iconic, but was held on a shortened course that started at the canoe shack, made three stops to Molokai Shores and returned to the wharf. All Fun Race crews were coed, with three men and three women.

Wallace would like to thank Trevor Palmer of DreamTech for the use of a WiFi device to play music at the canoe shack after the race.