Master Blasters: Fun for the Young at Heart 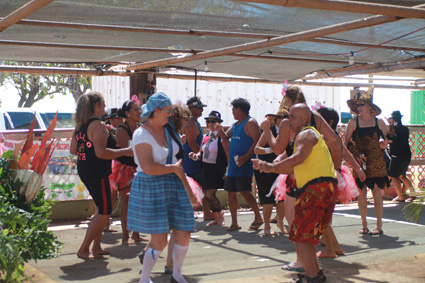 After-party at the Canoe Shack. Photo by Laura Pilz.

Whoever said it’s all downhill after age 50 has never paddled in Molokai’s annual Master Blasters Race. Participants say the event is just as much about making friends as it is about the paddling competition, the costumes and the drinking. With this year’s festivities featuring a crew of Jack Sparrow-lookalikes in one canoe, Spartan soldiers in the next and afro-wearing Amazonian women in another, there was fun to be had by all last Saturday in the 27th annual event.

“We did our best, we drank our beers and we had a lot of fun,” said Lea Giddens, who paddled with the Wildcat Witches from Maui. 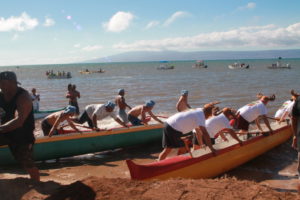 Every year, hundreds come from all across the state, dressed in creative matching costumes, to take part in the fundraiser, hosted by the Molokai Canoe Club. Twenty-five teams participated in this year’s race, which was held in honor of August Rawlins Jr., one of the founders of the club.

“We got to give him back what he put into this club,” said Rawlins’ daughter Liko Wallace, President of the Molokai Canoe Club and organizer of the event. She added that her father always enjoyed the Master Blasters race.

Each crew is made up of six men, age 40 and up, or six women, 35 and up. The race starts from Kawela Rice Patch and ends at Kaunakakai Wharf, an approximate six-mile paddle interrupted by four stops at which teams must pull ashore and each paddler chugs a full beer before getting back in the water. 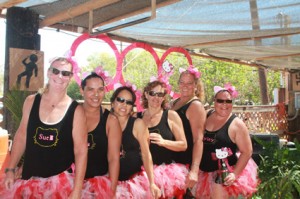 Festivities continued long after the last canoe reached the wharf’s canoe shack. In addition to food and music, there were dance contests and prizes – bags of dried squid –awarded to the winning teams.

“It’s one big family,” said Wallace. “Everybody wants to be involved because we all just have so much fun, [dancing] to the music we danced to in highschool.”

“It was a lovely time,” said Kaala Wright, who paddled in her first Master Blasters race with the Hello Etes this year. “The drinking was our most important strategy, and I was ecstatic that we won.”