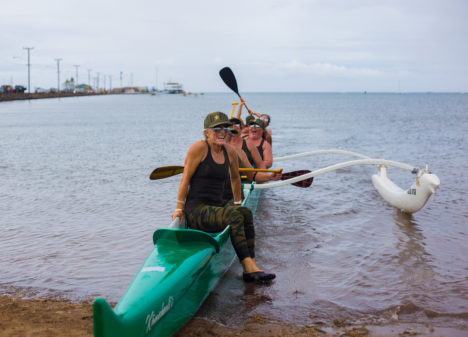 An unusually colorful scene played out along Kamehameha V Highway Saturday morning as canoe teams from around the state, bedecked in wacky costumes, gathered at Kawela Rice Patch to kick off the 32nd annual Molokai Master Blaster canoe race. 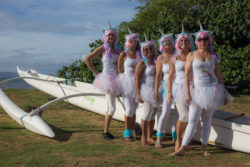 Several six-man teams dressed in creative outfits such as unicorns, witches, trolls and other lively characters, milled around the beach, prepping their canoes, laughing, and snapping photos of their outrageous costumes. Nearby, officials stood, holding beers for the teams to chug before setting out.

Race conditions were ideal according to Kaala Wright, of the Molokai Etes, who took first place in the Women’s Super Masters Division, defending their five-year streak as reigning champions.

“It was a good race. It was kind of sticky. Other than that, it was awesome.” she said “All the conditions that we kind of wish for so everybody else had a harder time than us. It’s our home ground so you know, most definitely we have home court advantage.”

The race, also known as the August Rawlins Senior Classic, is a six-mile route for Masters Division paddlers, ending at Kaunakakai Wharf. Along the route, each team must stop at four checkpoints, pull their boats out onto the beach, where each paddler must drink a full beer in front of their designated official before hopping back into their boats and paddling to the next stop. The winners in each division are awarded a bucket of dried squid and bragging rights.

When asked what their strategy was for the race,

Carmen Pilien of the Russo Flappers said they kept it simple.

“We practiced with beer. We drank beer for two days. We’ve been chugging,” she said, as her team laughed behind her.

For most of the teams, the theme of the day was summed up by Bernie Moniz, of The Pink Panty Ladies, who said the best strategy is to “Drink fast, get in the water, and paddle.”

This year’s race proved to be more popular than ever, with 29 teams participating. That’s good news for Molokai Canoe Club.

“This is our one and only fundraiser throughout the year that keeps our club functioning without having to raise dues,” club president Liko Wallace said. “As long as we make a sufficient amount of money, we can pay for our costs of existence.”

Wallace said the club uses the funds to help defray the costs of paddling for those on Molokai who may not be able to afford membership fees. 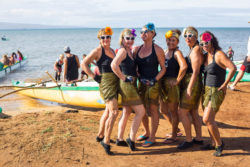 Each Master Blaster canoe team must meet a minimum age requirement of 35 years old for the women and 40 years old for the men, as well as meeting a minimum total age in their boat. The teams pay a $200 fee to participate, and also provide their own beers for the race.

Though most teams made certain to choose light beers such as Michelob Ultra, Modelo, Budweiser and Coors light, the selections varied widely. That’s no accident according to Wallace.

“For the ones who’s experienced, they realize that it’s part of the strategy. You gotta find a beer that all of you can drink.” she said.

Once the paddlers crossed the finish line, they were treated to lunch by the Molokai Canoe Club, an awards ceremony that included prizes for Best Dressed, Master Blaster King and Queen, and the Hard Luck Crew, followed by a dance party that lasted until the sun went down.

This year, the club also took time out to honor Kana Wallace, who volunteers at the canoe shack.

“He’s the one that keeps the place looking good,” Liko Wallace said. “He pretty much just comes down and puts in his time without getting any reward.”

Taking care of the canoe club is an honored family tradition that began with her grandfather, August Rawlins Sr., who volunteered his time caring for the canoe shack at Kaunakakai Wharf, where his wife paddled with the canoe club at the time.

“He and some others built the framework for the canoe shack that you see today,” Liko Wallace said of her grandfather. “We honored him with this race, even though he never drank.” 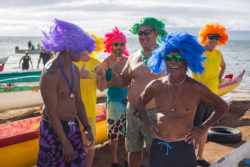 The Wallaces themselves also do not drink, and Liko Wallace is quick to mention that even though the event could be frowned upon by some, in 32 years there have never been any accidents or incidents, and that the race brings business into Molokai, without the club having to ask the community for donations.

On Saturday morning, it also brought a lot of smiles, laughter and fun to participants and spectators.

“It’s the best race. We train for it all year, and we love the people,” said Karen Chun of Maui’s Renegade Unicorns. “Molokai is so welcoming, and we’re just very happy every time we come.”

This years race winners were: