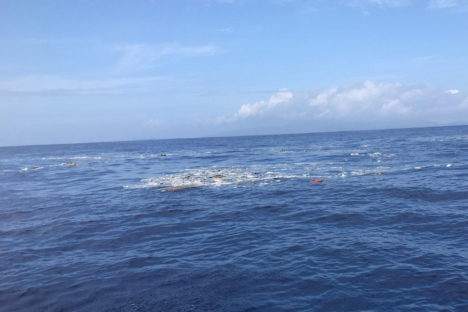 A portion of the marine debris field photographed by fishermen on Jan. 27; photo courtesy of DLNR.

A large marine debris field was spotted last week in the Ka`iwi Channel between Oahu and Molokai last week, causing concern that it could bring an influx of rubbish to Molokai’s western shores. The mass of nets, ropes, buoys, crates and drums was first reported by a fishermen on Jan. 27, who estimated its size at about two nautical miles long. State and federal agencies confirmed the debris field and its possible path was tracked by University of Hawaii’s Dr. Nikolai Maximenko and his team at the International Pacific Research Center at the School of Ocean and Earth Science and Technology.

Its trajectory appeared to be headed towards Molokai, and Department of Land and Natural Resources staff were scheduled to conduct a survey of any debris washed up on the island’s western shoreline. If it did make landfall, DLNR said the agency and its partners would work to remove it.

“As the currents in Hawaii are complex and dynamic we don’t have a good understanding of their effect on debris of this scale,” Maximenko told agency partners last week. “We are working with the Coast Guard to add a tracker to the debris to gather more data to aid our modeling.”

However, as of Sunday, Feb. 4, there have been no reports of pieces of the debris being spotted on the West End. On Wednesday, Jan. 31, a Coast Guard air crew  reported it appeared to have broken apart. They weren’t able to place a marker buoy in the debris as planned, but using search and rescue software, showed it to be drifting to the northeast, away from land.

“Based on our initial observations this appears to be more of a weed line than a debris field, containing a 40 to 60-foot wooden pole with marine growth, plastic bags, weeds, and other assorted debris,” said the Coast Guard’s John Titchen. However, the DLNR and Coast Guard warned boaters to beware and avoid the possible hazard. 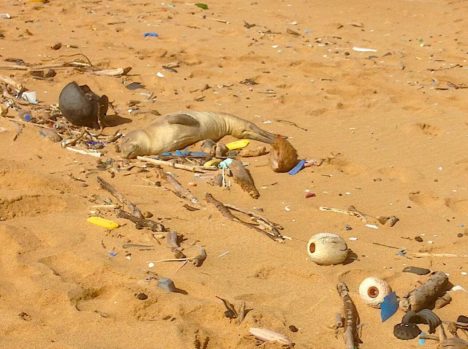 The debris field sighting served as a reminder for many of the importance of properly disposing of rubbish and ongoing efforts to keep island shores clear of debris.

“Unfortunately, this is a problem that’s not going to go away easily or soon,” said DLNR Chair Susan Case.  “We continue to encourage people who see marine debris, whether it be in open water or on the beach, to report it to NOAA and DLNR marine debris hotlines and websites.”

Beach cleanup efforts on Molokai continue, especially at Mo`omomi, where a recent cleanup was held. Along with volunteer efforts, The Nature Conservancy Molokai conducts up to 10 beach cleanups each year, according to TNC, often working with Sustainable Coastlines Hawaii, an organization that leads cleanups statewide.

“Unfortunately, marine debris has become a daily occurrence on many Molokai beaches,” said Diane Pike, Hawaii Marine Animal Response Manager on Molokai. “Debris, mainly plastic, has been found in birds, turtles, dolphins, monk seals and whales, and can be the cause of their death. Floating nets have also had a huge impact, entangling many species.”

She urged residents to make a habit of doing whatever they can to keep the coastlines clean.

“Often the quantity of debris on a beach is daunting, but if we get into the habit of taking a bag with us when we go to the beach and remove what we can, it will all help,” she said.

DLNR asks residents to report marine debris sightings by emailing DLNR.marine.debris@hawaii.gov  and DisasterDebris@noaa.gov, using the online form found at dlnr.hawaii.gov/dobor/reportmarinedebrishawaii, or by calling (808) 587-0405.