March in March: What We Love, We Will Protect

The statewide “March in March” event was inspired by professional surfer and MMA fighter Dustin Barca, in partnership with the Hawaii GMO Justice Coalition. Barca’s intention was to bring awareness to GMOs and chemical testing conducted by Monsanto and other biotech companies throughout Hawaii, pointing out that “everything we love is in serious danger — our children, our land and our ocean.”

Thousands gathered to voice their concerns; the five-island demonstration opened on Oahu, continued on Kauai, Hawaii Island, Maui, and concluded here on Molokai.

“I felt a sense of togetherness like nothing I have ever been a part of before,” said Molokai father Jay Duquette. “We said in the beginning that the march was about love and respect, I personally felt nothing but those things.”

Justin Zern, a Kauai resident, expressed, “I was so blessed and humbled to have the chance to be part of Molokai’s energy.” 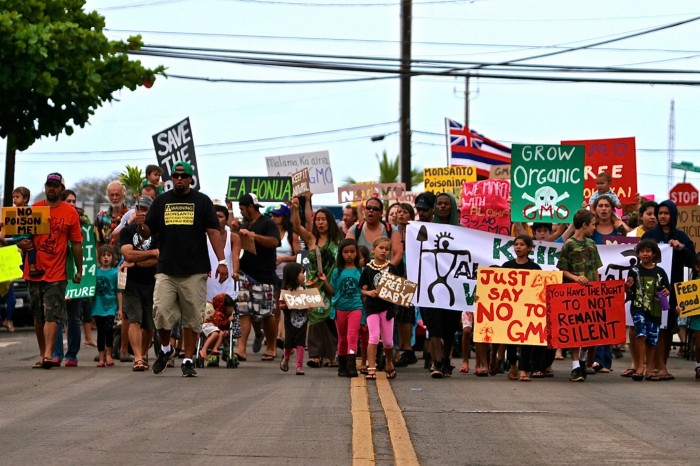 People of all ages and walks of life came together on Molokai for love of our keiki and `aina. The serene sound of the pu`ohe silenced all who gathered at Kalaniana`ole Hall on Saturday morning, March 30. A powerful prayer was given by Lehua Lee and chants were offered to “value, understand, share, and practice our connection to the ‘aina from those who are here now, those that came before us, and those that will come after us,” according to Molokai mother Kanoe Davis.

Before mothers and their children led the procession of 200 individuals, all present acknowledged a higher power, our kupuna, and established a cultural basis for this march. “It takes courage to stand up and be visible for what we believe, in such a small community where one can be often misjudged, categorized ‘by association’ and misinterpreted,” voiced Molokai mother Ehulani Kane.

Our “Keiki Aloha `Aina Warriors” led the way through Kaunakakai town. For Molokai father Levie Yamazaki-Gray, being a part of the march offered “an opportunity to teach my kids about taking a stand for what is important in a respectful and loving way.”

Felicia Alongi Cowden, a Kauai resident and mother shared, “I came to the march on Molokai out of respect toward the mana`o and leadership that Molokai is providing to all of Hawaii.”

“The march was so strong, the people and keiki, and the hula by the women to show their love and support,” said Molokai mother Maunalani Manintin. “It was an awesome experience that my family and I could be a part of.”

Malia Busby said it was a huge step for her to hold a sign and march in public, but she did it for her keiki and their future. “I will do it again in a heartbeat — because I have learned enough to know that probable danger exists to my children and my island and the planet.”

“We are the Adams and the Eves of this garden called Hawaii,” said Molokai father Hawaiiloa Mowat. “It is our responsibility given by the Creator to care for this land so when we leave this world the land will be there for the next generation.”

For Molokai mother Miyako Yamazaki-Gray, the march experience was a spiritual one. “To me, it was not about saying no to something. It was all about love, because we all have somebody who we love and have to protect.”

The Molokai march was fully supported by fathers and organized by Moms On a Mission (MOM), a grassroots group established to educate our community, raise awareness, and address concerns about that which harmfully affects the health and wellbeing of our children, families and environment.

Through educational community events and peaceful demonstrations, MOM has heightened the awareness of this controversial issue on Molokai, with the motto, “What we love, we will protect!” In the words of Barca, it is “time to put human health over corporate wealth!”

One Response to “March in March: What We Love, We Will Protect”