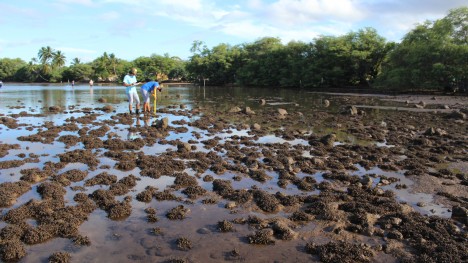 The migrating algae, subject to wind and tides, has settled into Molokai waters and is threatening reef life.

“It can just take over an entire area and become the dominant species,” said Brian Neilson, aquatic invasive species biologist for the state’s Division of Aquatic Resources (DAR).  “It overcrowds native limu, and it can grow over coral colonies and smother and kill coral.”

Before any removal efforts can begin, however, residents needed to identify the areas of the shoreline most under siege. Forty volunteers conducted a survey of the location and density of the invasive algae, slogging through 14 miles of ocean and recording over 5,000 data points from July 13-15.

“I have never seen such amazing community support for a project,” said Neilson. “It really shows how passionate and dedicated the Molokai community is for their `aina.”

Recent concerns over gorilla ogo have turned into a movement. One of the survey organizers, Office of Hawaiian Affairs Trustee Colette Machado, said she’d been hearing reports of increasing gorilla ogo on the east end. In March, five Molokai High School students presented their science projects on the effects of gorilla ogo and mangrove, two invasive species that inhabit Molokai’s south shore and foster each other’s growth. Many residents at the presentation expressed their shock and agreed something had to be done. 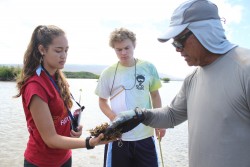 Teaming with the students, Machado and UH Maui College Molokai professor Cheryl Corbiell set up a booth at the Earth Day celebration in April to recruit volunteers. They then worked with officials from the Department of Land and Natural Resources (DLNR) to get volunteers trained and ready to study the shoreline in July.

“We don’t always agree on everything [as a community], but yet we can agree that the shoreline needs to be preserved and we need to know what’s in the water,” said Machado. “… We really must keep the ocean as free and as clean as possible.”

From Poke to Pest

The brittle, greenish brown algae is believed to have been brought to Hawaii in the ballast tanks of ships, said Neilson. Back when stones served as ballasts, sailors would throw the stones onto the shore upon arrival, allowing anything on the stones to spread. Gorilla ogo was first found in Hilo in 1971 and was brought to other islands for the purposes of aquaculture. It arrived on Molokai shortly before 2000, according to the DLNR’s website.

“It’s a very hardy, resilient limu that can kind of resist anything,” said Kirsten Fujitani, a marine fellow with The Nature Conservancy (TNC). “… It spreads by fragmentation, so any small piece that breaks off can spread anywhere else. It can float with the current … and grow into a whole other colony of algae.”

While few fish feed on it, island residents initially saw it as a tasty addition to poke and other local foods, Neilson explained. However, its growth was faster than human demand.

“Now we’re stuck with miles of gorilla ogo and it’s not really harvested to the extent to be able to keep it under control,” said Neilson.

To discover just how far along the shore gorilla ogo has spread, local biologist Arleone Dibben-Young divided the shoreline into 38 sectors, each approximately a mile long. Community groups took charge of different sectors, joined by scientists from TNC and DAR. Volunteers walked parallel to the shore, stopping every 50 paces to mark a “waypoint” on the GPS. At each waypoint, they recorded the type and intensity of algae growth, bottom type (silt, sand, reef, gravel) and bottom depth. 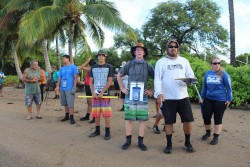 Scientists and volunteers prepare to survey the shore near Hotel Molokai. Photo by Colleen Uechi.

“The beginning is always the hardest thing to do,” said local charter captain Clay Ching, who led a group in charge of 14 sectors from Hale O Lono to Palaau. “… I’m excited because of the excitement of all the other people. People are coming for free. They love their `aina too.”

In some sectors west of the wharf, such as Palaau, the ogo is sparse in the sandy waters but can be found growing on the roots of mangrove along the shore. In some areas east of the wharf, like the waters between Hotel Molokai and Ali`i Fishpond, thick mats of gorilla ogo clog the silt-lined bottom.

Scientists also taught surveyors to identify and document hookweed and prickly seaweed, two other types of invasive alien algae that flourish around the ogo.

“Now we know what limu to maybe take out, and we can be more aware of what limus to not step on because it can [fragment and] spread,” said Aka`ula ninth grader Kekumu Helm. “I never knew that and I used to walk all over the limu ogo all the time, but now I’m just gonna be more cautious about it.”

Resident Candace Otsuka, who covered areas near Coconut Grove with the Kalama`ula Homestead Association, said it was “nice to be in area we live in and kinda take responsibility for that.”

While it’s not the first time gorilla ogo has been mapped along the island’s south shore, Neilson said it’s the most comprehensive mapping effort. In 2009, he explained, the DLNR’s Cecile Walsh mapped a few miles east of the wharf and later led efforts to clear 29 tons of alien algae from the south shore, according to DLNR reports.

In addition to DLNR efforts, volunteers work with the nonprofit Ka Honua Momona (KHM) to clear about 2,000 pounds of gorilla ogo at Ali`i Fishpond each month, said KHM kupuna leader Mervin Dudoit. Other residents have said they try to do their part by picking up alien algae from the beaches near their homes.

Unlike on Oahu, where it’s distributed around the entire island, the ogo has fortunately only been found on Molokai’s south shore, said Neilson.

“At least it’s contained to one side of island,” he said. “We have a better chance to control it and keep it from spreading to other places.”

Organizers said there are still 16 miles to be mapped. Corbiell said they’re aiming to start the second part of the survey on July 27 at 7 a.m. at Rice Patch. It will take DAR staff a couple of weeks to compile the data, and once the areas of highest intensity are identified, the community will be able to go out and start removal.

Dibben-Young, who’s in charge of writing the management and removal plan, said the plan is “about 80 percent complete” and covers safety, removal methods, equipment, data and permit requirements.

“It’s really amazing see how the community has mobilized,” said recent MHS graduate Sarah Jenkins, who, along with her sister Lily, were two of the students presenting on invasive species in March. “… It’s really cool to see all the different people in their own ahupua`a … do this data collection because they know how it’s affecting the area they live in and the south shore in general.” 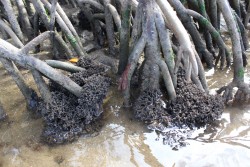 Ogo has previously been harvested and given to local farmers for use in their fields as fertilizer. Machado said it’s something she wants to look into again.

“I’m hoping that the long-term impact is that I can engage homestead farmers in Ho`olehua to help take these invasive species, this gorilla ogo, as we remove it,” she said. Local farmers have told her that the mulch created from the ogo is excellent for growing sweet potatoes, a signature Molokai crop.

DAR Fisheries Technician Kendall Tejchma said even if the gorilla ogo migrates between now and removal, the surveys give the community an idea of which areas need the most attention. The bottom type will also help predict which patches will stay put and which ones will move. Tejchma explained that gorilla ogo stays more rooted in nutrient-rich silt and rocky ocean floor but tends to float away from smooth, sandy bottoms.

“Empowering you guys to do it … is the most important thing,” she said of local community members. “Because if you guys don’t protect it, who’s going to?”