Molokai wrestler Cendall Manley claimed the island’s sixth ever state championship in the sport last weekend on Oahu. She was one of 10 Molokai High wrestlers representing at the event, and one of eight to medal. The girls team finished seventh in the state out of 42 teams. 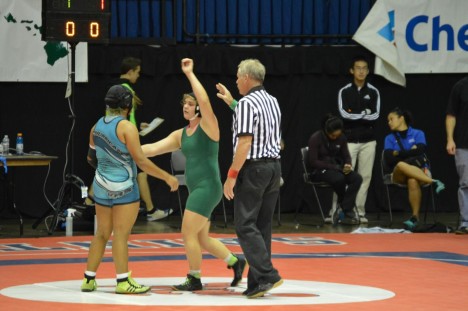 “I was speechless when I actually won and feel so blessed that God gave me favor,” said Cendall. “I am so honored that I got to represent Molokai in this way!”

Five wrestlers qualified on the girl’s side and all five Lady Farmers got a medal. Cendall Manley was State Champion in the 168 weight class, Alexandria Simon was third at 138 pounds, Esther Torres Umi was fourth at 145, Kelsie Lee Bicoy Juario was sixth at 132 and Martika English was sixth at 184.

On the boys side, three out of the five qualifiers earned a medal with Caele Manley taking fourth at 126 pounds, Maka Kaahanui earning fifth at 220 and Kuikamoku Han taking sixth at 285. Jordan Boswell and Diego Dupont also qualified for states but did not place this year.

“Our state experience was definitely the mountain top of our season,” said Head Coach Randy Manley. “They all worked hard and I am very proud of all of our kids.”

Coming from a family of outstanding wrestlers, Cendall earned the family’s first state championship medal, an especially proud moment for her coach and father.

“I would like to thank my dad for all that he has done to coach me through everything… he taught me everything that I know about wrestling and he has always been in my corner cheering me on,” she said, also expressing gratitude to her other coaches,  Kawika Kaahanui and Matthew Tanielu, and her team. 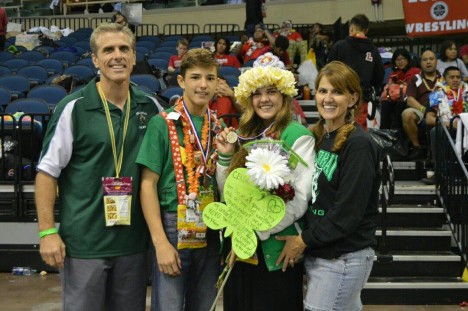 “She did an amazing job,” he said. “She’s a great example of hard work and persistence paying off.”

For Han, the tournament was a good way to to end his senior wrestling career.

“This state tournament, we took the most [athletes] we ever had in a while,” said Han. “I know that we wrestled hard and I am proud of Cendall for her win for the state championship. Now the season is over and we can eat!”

Simon, also a senior, enjoyed her time with Farmer Wrestling.

“It’s the greatest thing knowing that all girls we brought walked out of the Blaisdell with a medal around their neck,” she said. “I am going to miss my team, my coaches and all the MIL wrestlers. I am very thankful to have had such great and unforgettable experiences.”

“The most exciting part of the tournament was seeing my friends get their hands raised in victory,” she added. “Being able to see them accomplish so much makes me the happiest wrestler out there.”