Moani Chow has preserved thousands of pounds of mango. These sticky sweet or sour treats are a unique product on Molokai, despite the abundance of the fruit and simple process of cooking and drying that creates tender bite-sized candy out of average green mangos.

She has sold her dried mango at the Saturday Market, outside Imports Gift Shop and at Kamehameha School events. But mostly she gives it away to friends in the community and supporters of her daughters’ robotics activities. She began crafting these treats nine years ago, and as family shares them on other islands, her mango fan base is growing.

A Gift to Molokai 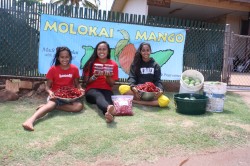 Moani Chow’s daughters, Lanakila, 11, Katy, 13, and Puakea, 15, have taken dried mango to their robotics competitions as a gift to judges and supporters. Photo by Emily Sumners

“There’s a lot of money in this mango,” Chow said. “I have proven there is a big demand and a big liking for it.”

She said based on experienced, she is confident 40 pounds of mango could bring in at least $600. Now she’s ready to commercialize her product, but not for her own profit. Chow is willing to give up the rights of her ono mango and hand over the reins of her business.

“I would love to establish a permanent foundation for Molokai youth, churches and sports to have a way to fundraise using the mango,” Chow said. “Even if I set it up and was written out of it, I’d still be ok with it.”

However, she does envision the program as the Clarence and Hillary Chow foundation, after her parents, who were community builders on Molokai. After all, what started as a mahalo gift would become a way to help Molokai.

“It’s a very nice way to thank people; it’s just a labor of love,” she said about her mango. “Now wouldn’t it be nice to make it a big labor of love to Molokai?”

Chow’s vision for Molokai Mango is inspired by Paul Newman, a food line that donates all proceeds above operating costs to charity. She said there could be a simple processing plant in town with a storefront for selling the mango. The product could also be used like Krispy Kremes, with education or sports groups selling them around the community.

She said if groups supply and chop their own mango, they could save that cost for their fundraising. And the people already donating their mangos to her could get a tax write-off if it was for charity. These mango donors already receive some finished product in exchange for their generosity, plus they don’t have the fruit falling and rotting in their yard.

Chow’s mango product is inspired by mango seed, a snack often brought in from the Philippines. But she’s making it locally, and leaving out the seeds so that buyers get the most for their money.

The magic starts with green mangos. Chow adds sugar, salt, food coloring and a secret spice. She then cooks them and then leaves them in the dry box. Based on local response, she said people preferred the red food coloring because that is how they grew up eating mango seed. However, for those who prefer it au naturale, she makes just as much mango without the food coloring now. Those dried mangos end up a yellow-brown color after the preserving process. She also makes some without the spice.

Chow has hundreds of pounds of finished product right now because she hasn’t been pursuing sales as much lately. Instead she’s been working, helping her kids and helping finish her Habitat for Humanity house.

“I need a hui of caring and good people that would join me in establishing a mango making plant here on Molokai that could be about Molokai,” she said. This includes grant writers, planners and business professionals.

Until then, anyone wanting to purchase dried mango can contact Chow at molokaimango@yahoo.com.

One Response to “Mango Mania”