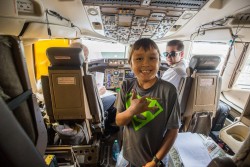 Ten-year-old Molokai boy Felix has had more than his fair share of challenges. Diagnosed with a progressive, genetic disease called Duchenne muscular dystrophy that causes muscle mass loss and weakness, he’s spent a lot of time in doctor’s offices. But for his 10th birthday, he forgot all of that and spent a week as a normal, happy kid, fulfilling his wish to visit Florida’s Disney World.

The trip was made possible by Make-A-Wish Hawaii, a nonprofit that grants wishes of children with life-threatening medical conditions. Make-A-Wish Hawaii CEO Siana Austin Hunt, who grew up on Molokai’s Kapualei Ranch, said Felix was referred to the organization by his doctor.

“He’s got a vivacious personally and his eyes just lit up,” said Hunt, referring to meeting Felix to discuss his wish. “When we talked to him, he had a really big hope for excitement. He wanted to ride roller coasters before he probably [no longer can]… He was over the moon to travel and incorporate his family.”

Felix’s adventure last month, which included his mom, dad and older sister, began with a send-off party at Dave and Buster’s in Honolulu. Riding in a limo to the arcade gaming venue, he was joined by family and friends wishing him well on his trip. Hunt said even strangers celebrated the occasion – when one person found out he was from Make-A-Wish, they showered Felix with 18,000 gaming tickets.

Hunt said aside from aside from traveling from Molokai to Oahu for medical appointments, the flight to the mainland was Felix’s first trip on a plane. But he didn’t just get a ride – Felix boarded early and was allowed to get a tour of the cockpit and talk to the pilots.

Once at Disney World in Orlando, Felix and his family stayed at Give Kids the World Village, a special hotel at the resort for kids with life-threatening diseases that partners with Make-A-Wish. 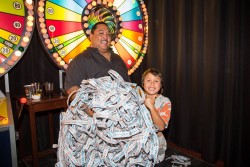 For Felix, who was recently fitted for a wheelchair to plan ahead for a time when his muscles may become too weak to walk, it was a chance to forget his disease and just be a kid.

From riding rollercoasters, to meeting Disney icons and even attending a rodeo, his mom Cheri Rivera called the experience “wonderful.”

“It was a once in a lifetime kind of trip,” she said in an interview with Make-A-Wish. “It made him feel very special…He turned 10 on his trip and it was the best birthday present he could have got.”

Hunt said granting wishes is all about reclaiming childhood and remembering what’s important.

“[It was] making the most of taking Felix out of what he goes through every day,” she said. “To laugh and be a family – that will carry them through their journey.”

Hunt said in the last couple of years, the organization has granted wishes for four Molokai children. She said Make-A-Wish Hawaii isn’t just for those on Oahu, and encouraged Molokai families, community members or those interested in volunteering to contact the organization.

“I think there’s no better community that loves on their families,” she said of Molokai. “To highlight them as heroes is a really great thing.”