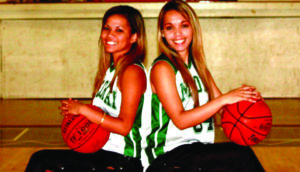 Seniors Brianna Tangonan and Kalyn Kaulia-Makaiwi pose for pictures on their home court.

Two of Molokai High School Girls Basketball captains, Brianna Tangonan and Kalyn Kaulia-Makaiwi, were named to The Maui News Maui Interscholastic League Division II All-Star first team for their performance on the court last season. Selections are made by coaches in the league, according to The Maui News.

“To make first team means a lot, because we were a fighting team to the end,” said first-year coach Addie McCreedy. “They should be proud of themselves, even if it wasn’t the season we hoped for. The team is very proud of them.”

Tangonan is currently a senior at Molokai High, and has played for the Farmers for the past three years. She started out as a guard this season, but adapted to play in the post as well, according to McCreedy.

“I learned a lot about time management skills and working hard,” said Tangonan. “I had to make time for college school, regular school and basketball. Even if it’s tough you still stick with it because at the end it pays off.”

After graduating this year, Tangonan plans on going to college. She said hopes to continue playing basketball in the future.

Kalyn Kaulia-Makaiwi, also a senior, has played for the Farmers for four years. Fellow captain Tangonan describes her leadership style as “hard-working.”

“Kalyn is our strongest ball handler,” said McCreedy. “She is not outspoken but you could tell the girls respected her and knew when to mean business.”

The girls are joined on D-II’s All-Star team by Allie Rudow from Seabury and also Lanai’s Kahelelani Zablan.