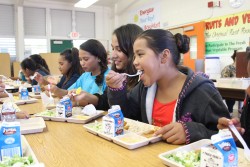 With the start of a federal free breakfast and lunch program offered in public schools island-wide and recent trends toward local, healthy eating, Molokai students are set to benefit in both the cafeteria and the classroom.

Last month, five Molokai schools were selected to receive free meals for all students regardless of household income through a U.S. Department of Agriculture pilot program called the Community Eligibility Provision (CEP).

While principals of most schools said making sure all students had lunch wasn’t a major issue in the past, they said it would still be a significant financial relief for many families. For example, at Molokai High School, a full-priced breakfast costs $1.20 for students, while lunch costs $2.75. The family of a student who ate lunch daily at the regular rates could save up to nearly $500, and just over $200 for a year’s worth of daily school breakfasts through CEP.

“Since we’ve had the program, most of the students do eat school lunch,” said Kualapuu Principal Lydia Trinidad, whose school began the program last year.

“In past years I just made my kids’ school lunch because it was cheaper for me,” said Kala Juario, parent of two Kaunakakai Elementary students. “Now I don’t have to wake up early every day to make lunch.”

Like many other families, Kaunakakai parent Dorie Carlson is excited about the program but also sees value in making lunch for her two school-aged kids.

“I know I’ll be packing them something healthier,” she said.

However, Carlson will still be signing up for the program, and it may not be a bad time to do so with the recent strides the state has been making toward providing higher quality food. In 2011, the Hawaii Department of Education (DOE) began the move away from pre-packaged lunches, turning 15 out of 25 monthly entrees into made-from-scratch meals. Although school districts in Colorado and Washington made similar moves around the same time, Hawaii is still in the minority, said Dann Carlson, the DOE’s Office of School Facilities and Support Services Assistant Superintendent. 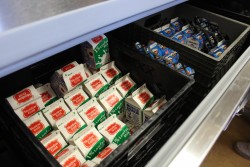 “We’re one of the only school districts that makes all of our meals from scratch,” he said. “We’re proud of the fact that kids do end up with a very healthy, non-processed meal.”

While there’s no way to guarantee that every from-scratch school meal is as healthy or healthier than the wide variety of home lunches, Dann said the DOE must meet strict USDA guidelines in order to be reimbursed for school meals.

The USDA requires fruits, vegetables, grains, meat or meat alternates and milk in the average lunch, and has specific serving sizes of each based on the quantity of calories recommended for each age level, according to the USDA website. For example, at least half of the grains during the week must be whole-grain rich, with the criteria for “whole-grain rich” including eight or more grams of whole grains per serving.

Hawaii’s move to healthier school eating has recently taken another step. Last month, Gov. David Ige signed a bill creating a farm-to-school program, which aims to teach students more about healthy foods and local agriculture through school gardens and nutrition education programs. According to the bill, at least 20 states have similar programs in place.

Dann said the DOE is looking at “how to best maximize” the program within schools, and admitted it’s not always easy for local farmers to produce the quantities needed for Hawaii schools.

“When you’re trying to procure [local products] for 100,000 meals a day, you have issues with farmers being able to produce that because of seasons and everything,” he said.

It’s a challenge even on Molokai, which relies heavily on its agriculture. At Molokai High School, the students are growing bananas and kalo on campus. However, the gardens aren’t nearly large enough to support a student body of more than 350.

“From the time we started the farm, [feeding students] has always been the objective,” said MHS principal Stan Hao. “… But it’s about having the capacity and the consistency, too. Because of the size of our farm we won’t be able to do things year round.”

This year, the organization became the vendor for a federal initiative called Fresh Fruit and Vegetable Program. According to a press release, they provide fresh fruit or vegetable snacks to Maunaloa Elementary School two or three times a week and are continuing to seek local producers so they can expand the program to other Molokai schools. Growers must to able to provide 60 servings of fresh fruit or vegetable with a minimum serving size of half a cup.

“It doesn’t make sense to go outside [of local vendors] and find food from someplace else,” said Hao.

With Food Hub and the possibility of farm and school partnerships on the rise, Hao and other school officials said they look forward to seeing what the future holds for students and cafeterias.