Making History on the Mat

Molokai High senior Rizpah Torres-Umi is the first MHS wrestler to ever be named a four-time Maui Interscholastic League (MIL) champion. And she’s now ranked the number two 125-pound wrestler in the state this year.

“When I want something, I’ll go for it and I’ll get it,” she said, before competing in the state event on Friday and Saturday. 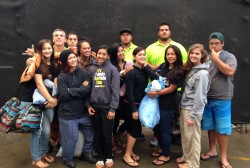 On the boys’ side, Iokepa Albino and Kuikamoku Han represented Molokai.

As a girls captain, Rizpah helped lead the team in a sport that’s nothing new to her. She began wrestling at age six. As one of 12 children, her dad, Bill Umi, said the sport runs in the family.

“Five ahead of her were involved in wrestling and they kind of paved the way for her,” he said. “But she’s her own independent, focused, determined individual.”

Coach Randy Manley said he’s worked with Rizpah since she started the sport, and was full of encouragement before states.

“No matter how it ends up, she’s had a great run,” he said, adding he set a goal of her getting into the final match, and from there, called her chances at a state title “realistic.”

Rizpah, having earned a number two seed ranking going into the state championship, did make it to the finals at the Neil Blaisdell Arena. However, she lost the match to two-time individual title-holder Shannon Paaaina of Mid-Pacific Institute, an Oahu college prep school.

But despite the loss, Rizpah still finished her high school career strong.

“It feels super good,” she said of her four-time MIL status. “All the hard work paid off.”

Fellow MHS senior Karley also won her 105-pound MIL title, and like Rizpah, went into states seeded number two. In her third year of high school wrestling, she said she was feeling confident and determined as she prepared for her final weekend of competition.

“I feel good,” she said. “I’ve never been seeded this high.”

She said as co-captain of the girls team with Rizpah, she felt more pressure to set an example for her teammates as a senior.

Manley said it’s impressive “for her to do what’s she’s done in three years.”

“I want to win my first match, then go on,” she said of her goals for states.

And she did just that. Karley battled on the mat all the way into the semifinals, but suffered a loss, ranking in fifth place. That’s an improvement over her sixth place finish at states last year.

Rizpah’s younger sister, sophomore Esther, also won her MIL 121-pound class this year, but like Karley, finished states in fifth after defeat in the semifinals.

To prepare for each match, Esther has figured out the best way to calm her nerves.

“I sing to myself,” she said. “It gets me pumped… some other people hit their face or jump around – they’re crazy… For me, a light jog and a hum [gets me ready.]”

Last year, Esther went into states seeded number eight, and this year, she got a three seed.

“I feel like a champ [already]!” she said, before states.

Cendall, wrestling at 140 pounds, joined Karley and Esther with a loss in the semifinals, closing the championship in fifth.

On the boys’ side, Iokepa and Kuikamoku both ended the season in the preliminary matches of states.

MHS junior Iokepa won his MIL 220 weight class, receiving a number three seed going into the weekend. He said he suffered only one loss during the regular season.

This is only his second year wrestling, and credits his performance in the sport to playing football.

Going into states, he said his goal was to take one match at a time.

“I’ll work my hardest – we want to let everyone know Molokai has some good wrestlers,” he said.

The boys and girls teams, though separate, support each other closely, he said.

“The boys help the girls, and the girls help the boys,” Iokepa explained.

Manley said the team faced many challenges this season.

“We’ve had a lot of things going against us this year,” he said, listing a series of injuries and absences. “This is one of our strongest teams because of the things they’ve had to overcome.”

One of those injuries included a fractured ankle for Noah Caparida, who started the season as captain of the boys’ team.

“He’s very motivational for us,” said Iokepa. “He was missed.”

Noah came back at the end of the season to place third in the MILs.

For Rizpah, even though she’s wrestled on the high school mat for the last time, her career in the sport is not over.

She will attend William Baptist in Texas next year, where she plans to wrestle as well as pursue a major in midwifery.

In addition to her own training, Rizpah acted as a mentor for her younger teammates this season. She said she offers them personal support and they often come to her for advice.

“I made them know this may be their first season, but they can win if they stick with it,” she said. “Most of the girls have come out of their shell this year.”

Esther described her sister as a motivator.

With states behind her, Rizpah said she’s looking forward to eating whatever she wants after always having to mind her weight class.

“Wrestling isn’t for everyone,” she said. “[But the sport] has taught me a lot – I’d recommend it to every girl.”

Starting preseason in October and the regular season in November, Manley said it’s a long time for students to focus on wrestling.

“They’ve worked hard and it’s remarkable that high school kids to stick it out this long,” he said. “I admire these kids – they’ve overcome a lot to get where they are.”