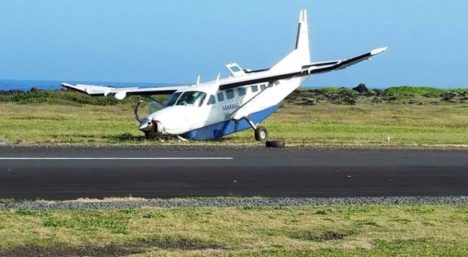 A Makani Kai flight landing in Kalaupapa last Saturday made a hard landing and skidded off the runway. The nine passengers aboard the flight were uninjured. However, the plane suffered damage to its nose, landing gear and wing, according to officials.

Makani Kai President Richard Schuman told Hawaii News Now the flight was on final approach to land and had been told by another, private aircraft at Kalaupapa that the other pilot was clear of the runway. However, when the Makani Kai flight touched down, its pilot had to maneuver abruptly to avoid hitting the other aircraft that was still on the runway, said Schuman.

Kalaupapa Airport doesn’t have a control tower, so pilots communicate with each other directly over the radio.

Kalaupapa resident Shannon Crivello said a patient resident was one of the passengers on the Makani Kai flight.

“The [Makani Kai] pilot tried to avoid crashing into the plane and skidded and damaged the wheels and wings on the plane,” Crivello wrote on social media. “… Luckily no one was seriously hurt.”

Federal aviation authorities are investigating the incident. Look for updates in The Molokai Dispatch as they become available.