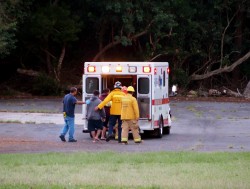 Survivors were airlifted from Kalaupapa to waiting ambulances in Kalae, Molokai. Photo by Catherine Cluett/All Rights Reserved The Molokai Dispatch

A Makani Kai flight departing Kalaupapa this afternoon crashed into the water about 3:45 p.m. shortly after take-off about 1/2 mile off the peninsula last night. Eight on board the Cessna Grand Caravan survived, while Department of Health Director Loretta Fuddy died in the water after exiting the sinking plane.

The pilot, Clyde Kawasaki, has been flying for Makani Kai for one year. He previously worked as a pilot for Aloha Airlines and has experience working thousands of hours of flight time, according to a Makani Kai representative.

“He’s a pilot that I’ve flown with frequently — he’s one of the best,” said Department of Health Kalaupapa Administrator Mark Miller. “He proved it by being seriously injured and still getting everyone out the airplane.”

Miller said Kawasaki was bleeding with possible broken ribs and leg injuries when he arrived on shore after being pulled from the water by Maui County Fire Rescue and Coast Guard personnel.

“He got the plane landed [on the water] and was able to get everybody out,” continued Miller of Kawasaki. “The currents out there were awful… with big waves and white caps… He tried to get everyone to stay together… they all had life vests on.”

Miller said Fuddy and fellow passenger DOH Deputy Director Keith Yamamoto were separated from each other by the currents.
He said by 4:30 p.m., seven passengers were accounted for but two were still in the Coast Guard helicopter. The male on board survived but Fuddy could not be revived.

According to the Coast Guard, rescue swimmers were deployed from helicopters, rescuing three passengers in the water. Maui Fire Rescue rescued the additional passengers.

Miller said Fuddy’s body was taken to the care home while a priest came to say the last rights and some residents paid their final respects. Her body was then transported to Molokai General Hospital.

Besides the two Department of Health officials, Miller said two of the passengers were tourists, one was a construction worker, another came to do some work for the day in Kalaupapa, and one was a Kalaupapa National Park Service employee, along with her husband.

Miller described the survivors as dazed and subdued when they got back on shore.

According to Molokai General Hospital staff, the three survivors who were taken to the hospital last night arrived dripping wet, cold, hungry and most of all, tired. The hospital washed and dried their clothes, fed them and let them rest. The three reportedly stayed at Hotel Molokai last night.
Three of the other survivors were taken directly to Oahu, while two declined treatment, remaining in Kalaupapa, according to emergency officials.

Miller called it fortunate that a military aircraft was doing touch and goes at the Kalaupapa airport around the time of the crash and reported the accident. Within 15 minutes, Coast Guard was on site, and minutes afterward, Maui County fire and rescue personnel had divers starting rescue operations, said Miller.

“We set up triage station in the airport — everybody was there to lend assistance… with blankets, extra clothes and food,” reported Miller.

Yamamoto was reportedly physically uninjured, and he and Kawasaki flew back to Honolulu on an airplane provided by Makani Kai.
Fuddy and Yamamoto were visiting Kalaupapa for a regular DOH of meeting to meet with patients and employees, according to Miller.

“Everybody loved her,” said Miller of Fuddy, adding that she will be dearly missed. A community meeting in Kalaupapa was held this morning for residents to grieve and remember her, while a grief counselor will visit the settlement next week, Miller said.

Fuddy, in addition to being the DOH director, also acted as mayor of Kalawao County, the smallest county in the U.S., that encompasses Kalaupapa.

The cause of the crash is unconfirmed by investigation officials at this time.

According to the Honolulu Star-Advertiser, Kawasaki reported “catastrophic engine failure.” Kawasaki said he heard a bang before the engine failure and then had everybody put on life vests, the Star-Advertiser quoted Makani Kai owner Richard Schuman as saying this morning.
The federal investigation of the accident by the National Transportation Safety Board (NTSB) has now begun. Federal transportation officials have reportedly stated the wreckage may be impossible to recover. An initial report could be completed within two weeks.

Meanwhile, Makani Kai is continuing its flight schedule, and Miller said a patient resident and DOH employee flew the airline out of Kalaupapa just this morning.

Makani Kai has been serving Kalaupapa for the last three years, with enthusiastic support from the community. The company is currently in the application process for renewal of a federal subsidy to continue service to the settlement. Three other airlines, including Mokulele, are competing for the Essential Air Service (EAS) appointment. Miller said Kalaupapa residents remain in full support of Makani Kai’s renewal efforts. The announcement should be made by Jan. 14. 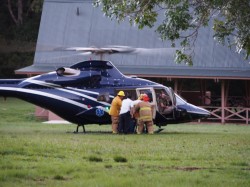