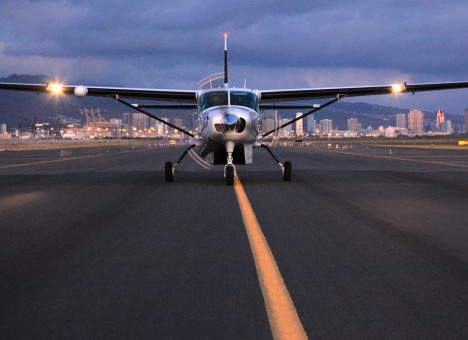 Currently, Makani Kai operates between Ho`olehua, Kalaupapa and Honolulu. In June  the airline will add six daily round trips between Molokai and Kahului and two weekly between Kalaupapa and Kapalua, according to P.J. O’Reilley, the company’s director of sales and marketing.

Makani Kai will kick off the new routes with introductory online fares of $39  one way and $78 round trip between Maui and Molokai. The flights, which will be available online starting May 1 , must be booked by July 1 for travel by September 1.

After that, the new routes will cost $100 round trip, which is the airline’s across-the-board fee.

“We want to be the guys that don’t change the price,” said O’Reilley, pointing out that many airlines charge more on high traffic days. “We want [customers] to have the convenience of knowing the airfare no matter what.”

Schuman said the company is hiring eight to 10 Maui-based employees, including three or four pilots, and has purchased a new plane to handle the increased flight load.

“If we have a maintenance issue … like a flat tire, we have an aircraft standing by,” he said. “We’re good at covering ourselves and getting back on track.”

Makani Kai, which was established in 2009 by Schuman Aviation Company, first started offering flights to Kalaupapa for residents and tourists and later added routes between topside Molokai and Oahu in June 2013. Last year the U.S. Department of Transportation (DOT) awarded the company its second Essential Air Service (EAS) contract to provide federally subsidized service to Kalaupapa for the next four years.

“I think it’s good to have more options, and you don’t have to deal with the TSA,” she said.

For Maui resident Dean Hashimoto, who travels to Molokai at least 10 times a year for his paving construction job, the increase in options could also pay off for both islands in the long run.

“I think it’ll bring the fares down too,” he said . “… With competition and cost of fuel going down, that should help out a lot.”