Uncle Mac Poepoe has spent a lifetime putting traditional fishing practices and resource management into action on Molokai’s northern coast. And for that, he was honored last week with the 2013 Umu Kai Award. Established in 2008 by the National Oceanic and Atmospheric Administration (NOAA)’s Office of National Marine Sanctuaries Pacific Islands Region, the award recognizes Native Hawaiian practitioners’ contributions to modern fisheries conservation.

As a fisherman and educator, Poepoe’s goal is to pass on to youth what he calls “Hawaiian science” — or “the stuff we observe.”

“Ultimately, our success will be determined by the next generation,” said Poepoe. “It’s not about what degree you have but what you teach [youth].” 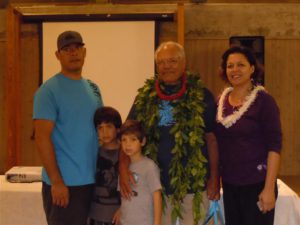 Mac Poepoe was awarded the Umu Kai Award and is pictured here with his wife, son and grandsons. Photo by Catherine Cluett

Poepoe’s efforts in the Mo`momi area have become a statewide example of the success of traditional management practices. The data he’s collected has been compiled into the acclaimed Pono Fishing Calendar, a localized guide to fishing based on the lifecycles of fish. The calendar has inspired other communities around Hawaii to adopt a similar approach.

Through partnerships with a variety of state and federal organizations, Poepoe has developed resource materials, programs and curriculum that have in many ways set the standard for small-scale conservation management today.

The Umu Kai Award is named after the traditional Hawaiian practice of enhancing fish habitat by carefully piling stones in the water. The award was established to honor the legacy of late Uncle Eddie Kaanaana, a Native Hawaiian cultural treasure, who was first recipient of the award in 2008.

The award was given to Poepoe at a kick-off event for Makahiki on Thursday night that included a Marine Resource Fair at Kulana Oiwi and a talk by Poepoe himself about his work and the goals of the nonprofit he helped establish, Hui Malama o Mo`omomi. Staff from the Papahanaumokuakea Marine National Monument, one of the agencies that manage the Northwestern Hawaiian Islands, came to present Poepoe with the award and speak about the honor.

“The people we work with are students of his,” said Keoni Kuaoha, Native Hawaiian program coordinator for Papahanaumokuakea, of Poepoe’s far-reaching influence.

“Uncle Mac is well known statewide,” said Moani Pai, Papahanaumokuakea administrative officer. She said Poepoe taught her the importance of biology in traditional management — his understanding of each species’ lifecycle and reproduction is the logical reasoning behind Hawaiian fishing protocol.

Past recipients of the Umu Kai Award have included Hawaiian navigator Nainoa Thompson and Department of Land and Natural Resources Chair William Aila.

“If you keep taking, you’re going to end up with nothing,” Poepoe said of fishing. “But if you keep pono, you will always have.”