MAC at the Library 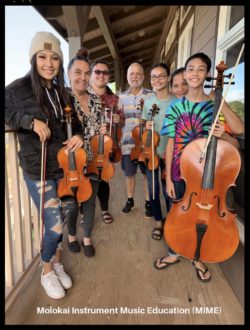 MAC at the Library is back! Molokai Arts Center returns to the Molokai Public Library with Artist in Residence Rafael Lamas (all the way from Spain!) conducting the Molokai Instrumental Music Education (MIME) Septet. The event, which will be held on the lawn behind the library on Wednesday, Aug. 31 at 5:30 p.m., will give Lamas an opportunity to teach conducting and share his journey on Molokai. Bring your hali‘i or lawn chair and experience culture and the arts on Molokai.

Lamas is an orchestra conductor, a concert pianist, a creative writer, and Professor of Spanish Literature and Cultural Studies at Fordham University at Lincoln Center of New York. He has performed throughout Europe and the United States in venues such as New York’s Carnegie Hall, Lincoln Center for the Performing Arts, and Symphony Space, Vienna’s Konzerthaus, and Granada’s Auditorio Manuel de Falla. His most recent conducting engagements include works such as Cherubini’s Requiem, Beethoven’s Emperor Concerto, Dvorak’s New World Symphony, and Tchaikovsky’s 5th Symphony. He is the current music director and principal conductor of the Academic Orchestra of Granada. He is the author of “Musics of New York” (Músicas de Nueva York, 2019), “Listening and Interpreting” (Escuchar e Interpretar, 2014), “Music and Identity” (Música e Identidad, 2008), and several articles that appeared in peer- reviewed journals. He was awarded the 2006-2007 Rome Prize, and was artist-

in-residence at the Chulitna Lodge Research Institute in Alaska. Lamas is the third and final MAC Artist in Residence for 2022.

During his two-month stay on Molokai, Lamas worked on a creative piece based on Spanish emigration to Hawaii. As a scholar and musicologist, Lamas sought to learn about local culture and music. As a performer (orchestra conductor and concert pianist), Lamas engaged with local musicians and worked with MIME. His time on Molokai culminates with the performance and educational presentation by MAC in partnership with Molokai Public Library.