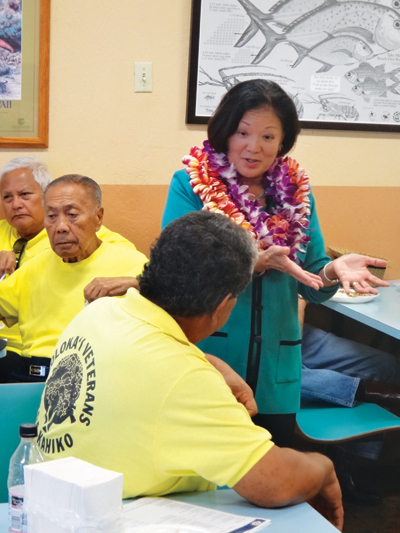 Congresswoman and Democratic nominee for U.S. Senate Mazie Hirono paid the Friendly Isle a visit on Thursday to talk story with members of the community. She hosted a question and answer (Q&A) luncheon with the Molokai Veterans held at Molokai Drive Inn.

At the Q&A session, Hirono discussed her commitment to provide benefits for veterans, her plans to introduce bills that would create jobs for Hawaii, her work with schools to promote sustainability and her ongoing crusade to protect middle class taxpayers. She stressed the need to “cut the fat”–or wasteful spending –from the budget to reduce the national deficit, not by increasing taxes for middle class families, but by eliminating the Bush tax breaks for big oil companies and the wealthiest two percent of the American population.

“I will continue to be a voice for veterans, women, seniors, teachers and young people who just want a chance at the American dream,” said Hirono.

In the primary elections earlier this year, she bested former U.S. Representative Ed Case for the Democratic primary. She faces former Hawaii governor Linda Lingle for an open U.S. Senate Seat in the General Elections in November. If victorious, Hirono would become the first Asian-American woman ever elected to the U.S. Senate.

“One person can make a difference,” said Hirono. “But imagine if all of us came together to make a decision. That’s power.”

Earlier in the day, Hirono also sat with students at Molokai High School to discuss sustainability initiatives, followed by a visit to University of Hawaii Maui College, Molokai’s farm in Ho`olehua.