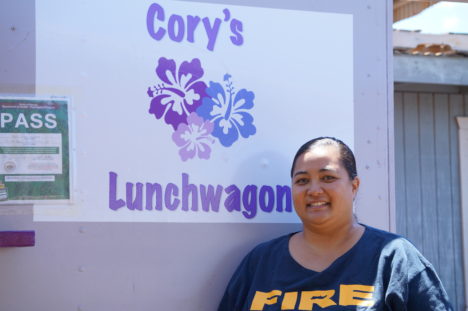 For those who relish the savory eats you find at Cory’s Lunchwagon, you may not know the long history behind this local eatery. Launched in 1996 by Melody Alcon, it originated as Cody’s Lunchwagon. Kapua Balbas, current owner and operator of Cory’s, reflected on her time assisting her mother with the family owned lunch wagon up until she moved to Arizona after completing high school.

“Once I graduated and moved to the mainland, I was hungry for local style food, [such as] spare ribs, hamburger steak and shoyu chicken, so I’d call home and get recipes from my mom,” she said “All of the recipes were taught over the phone and I’d recreate them for my friends.”

She tried to keep the recipes as authentic as possible, however living out of state she often had to improvise.

“Spare ribs calls for brisket bone but they didn’t always have that, so I’d substitute with pork butt,” she recalled. “My friends didn’t know the difference but I could tell; It just wasn’t the same.”

Balbas returned to Molokai after completing her time in Arizona and launched Cory’s Lunchwagon — located between Bobo’s Auto Service and Kamoi’s Ice Cream Shop on Kamoi St — in 2003. She acquired the wagon from her mother and continued to serve the community until 2008 when she became pregnant. 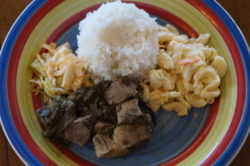 After the closing of the Molokai Drive Inn in 2015, Balbas saw an opportunity to relaunch Cory’s and was inspired to take action. After an eight-year absence, Cory’s officially re-opened in January 2016 with their unique grab and go style lunch menu. She said she realizes her clientele often come during lunch breaks so food is pre-cooked and ready to serve as soon as they open for business.

She purchases all food items locally, through grocers Friendly Market Center and Misaki’s due to the convenience of items needed onisland. Shopping local is not without its challenges, and Balbas said the key is to always have a plan B with her often having to think on her feet.

“I try to head to the store at 4:30 everyday to shop for the next day,” she said. “The menu is planned based on the store options; some days I’ll plan on serving one item and leave the store with something totally different”.

Despite the challenges, there have been some big rewards, with Balbas saying her favorite is people’s reactions to eating her food and complimenting on the quality and taste of it.

“There are county workers that have been coming since my mom ran Cody’s and are still eating the same thing all of these years later with Cory’s,” Balbas said. “They call regularly to order their shoyu chicken and oxtail soup.”

Looking ahead and what’s in store for Cory’s, Balbas said she has plans to continue with their nightly dinner options and hopes to incorporate more salads and desserts to the daily menu.

For those who have yet to try Cory’s Lunchwagon, they serve the community on Monday, Tuesday, Thursday and Friday from 10:30 a.m. until food is pau — which is typically around 1 p.m. — and Wednesday night dinner beginning at 4:30 p.m. to pau.