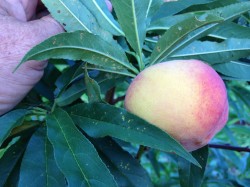 By By Glenn I. Teves, County Extension Agent, UH CTAHR

Low-chill fruits are temperate fruit varieties developed for warmer conditions, such as parts of Florida and California, but many will set fruit even in the cooler parts of Hawaii. Varieties requiring 100 to 200 chill hours are the best bet in Hoolehua, while others up to 300 chill hours may fruit in Kalae and Maunaloa.

Breeders in Israel have developed low-chill apples, including Anna, a variety resembling Red Delicious. Dorsett Golden, resembling Golden Delicious, is from a seedling found in the Bahamas. A recent University of Florida development is the TropicSweet apple. With many temperate fruit crops, it’s advisable to grow two different varieties for better pollination. Pears probably have good potential because they’re already growing in Hoolehua and Kaunakakai. Three low-chill pear selections include Flordahome, Hood, and Keiffer.

In the mixed up world of stone fruits, many related species can be crossed to create new tastes. Some have been around for a long time, including the plumcot, a cross between a plum and an apricot created by renowned plant breeder Luther Burbank more than 100 years ago. Pluots pull more to a plum than an apricot, while apriums pull more toward apricot traits than a plum. Another development includes nectaplums, a cross between nectarine and plum. Most of these varieties require 200 to 300 chill hours, and might be adapted to only the coldest areas of Ho`olehua, but may do well in Kalae and Maunaloa. The wind chill is a factor in driving temperatures down, especially in Ho`olehua.

Many peach varieties are showing promise in Hawaii, including Tropic Snow, a white peach and also Tropic Beauty, Tropic Sweet, and Tropic Prince, with many new developments in the pipeline. Field trials are being coordinated statewide to identify the best varieties for different climatic zones.

Temperate fruits are very different from tropical fruits in that many require severe pruning to prepare them for the next fruiting season. This is usually performed in the winter on the mainland when trees are dormant, but is not the case in Hawaii where determining when to prune is key since it affects flowering and subsequently fruiting times. Of these, peaches require the most severe pruning with about 70 percent of branches removed to prepare the remaining wood for the new fruits by creating a funnel shaped tree. Removing 1/3 of each remaining branch, and opening the center of the tree will allow the sun to shine on all fruits to produce the best sized, high-quality fruits.

There’s been a flush of new low-chill blueberry varieties fueled by increased interest in this high antioxidant fruit in many parts of the world, including Argentina, Uruguay, South Africa and China. UH research on Hawaii Island has identified varieties that fruit even in Hilo. Southern Highbush low-chill selections include Jewel, Emerald, Biloxi, Sunshine Blue, Misty, Snowchaser, Ventura, and Sharpblue. Most require 150 to 300 chill hours.

Many mainland fruit tree producers will only sell to nurseries. Sources of low-chill fruit trees on Oahu include Ko`olau Farmers and Pangs Nursery.