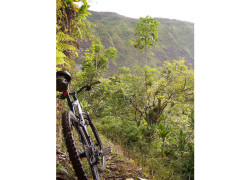 At 7:19 p.m. on Wednesday, July 20, Molokai firefighters and police began searching for an overdue bicyclist that went for a day trip ride on the Makakupaia Trail, which overlooks the Waikolu Valley.

A 50-year-old man from Mountain View, California, rented a bicycle at 6 a.m. Wednesday morning and planned to go for a day trip biking up to the Waikolu Valley lookout. He was to return the bike to the rental company at 6 p.m. that evening, but failed to show up at the designated meeting point. The rental company then reported the man overdue to fire crews.

Police and fire crews found the man’s bike chained to a tree where Forest Reserve Road connects with the Makakupaia Trail. Crews searched along the Makakupaia Trail to The Nature Conservancy’s boardwalk, but suspended the search at midnight after finding no other clues.

The search resumed at 6 a.m. Thursday with police, firefighters from Kaunakakai, a rescue crew from Kahului, and Air 1 searching forested areas near the 3,500 foot elevation at the top of the mountain. However, Air 1 could not be used because the area was socked in by clouds.

A note for the man was left on the bike, saying if he returned, to remain at the spot because rescuers would check back later. When police got back to the bike at 8 a.m., the man was there waiting for them.

The California visitor stated that after he got lost yesterday afternoon, he decided to bed down on the trail for the night, rather than risk walking in the dark. He became lost after he left the trail on foot and somehow ended up down in the Waikolu Valley. At day break he found his way back to where he left the bicycle.

The man was in good condition despite being overnight without food, water or warm clothing in the high mountains. Fire crews gave him a jacket and a ride down the mountain, where they made it out to the trailhead on Kamehameha V Highway at 9:30 a.m. No medical attention was needed.