The fate of a proposed industrial wind farm on Molokai is currently waiting on Hawaiian Electric Company (HECO) to release a Request for Proposal (RFP), which will open up the 200 megawatt (MW) project to other islands and to other forms of renewable energy generation.

Residents concerned about the uncertain future of the state’s energy proposals on Molokai still have to wait some time for a conclusion. HECO spokesperson Peter Rosegg said the RFP will not be finalized until the end of this year — and the utility will not be choosing a contractor from the applications received until late 2014 at the earliest, he said.

Rosegg called the RFP process a “relatively long timeline” by the public’s standards. A draft of the RFP has been up on the utility’s website since October of last year.

“We had a lot more questions [about the draft RFP] than we anticipated,” Rosegg said, which necessitated revisions of the document, causing delayed finalization.

Proposal Process
In July of last year, the PUC ordered that HECO restart the bidding process for the 200 MW project after wind developer First Wind backed out of their plans for Molokai. Originally, the state plan called for 200 MW of energy to be generated on Molokai, and 200 on Lanai. The current RFP now allows for a wider range of projects to be proposed on any island.

Once HECO finalizes the RFP, the document has to be approved by the Public Utilities Commission (PUC), which monitors all steps of the process. Once the final RFP is released, it takes time for interested energy companies to get their applications together to meet the RFP’s requirements and place a bid for the project, said Rosegg.

The RFP calls for 200 MW annually of renewable energy to be generated for use on Oahu — or about 10 percent of their current annual electricity usage — as well as an undersea cable system to transport the energy. Rosegg stressed the project does not necessarily call for a project on Molokai. Bidders can propose projects located on Oahu, on a neighbor island, an undersea cable system bid, or a bid for a neighbor island project combined with the transmission cable. Energy could be generated by renewable sources such as wind, solar, or any combination, said Rosegg.

Because any proposed off-Oahu projects must be able to connect to Oahu via cable, Rosegg called a project on Hawaii Island “pretty much off the radar,” saying technical and logistical challenges of running a cable there are currently very difficult.

The draft RFP calls for all proposed projects to begin operations by Dec. 18, 2018.

Rosegg said there has been a lot of interest in the project by potential bidders. He said several hundred companies attended a conference held last November, but said that doesn’t mean they will all be bidding.

“It costs several hundred thousand dollars to just prepare the proposal,” said Rosegg of the lengths companies must go through to respond to the RFP. “We don’t know how many yet, but we don’t expect hundreds.”

Pattern Moving Forward
One company that has made no secret of their interest in Molokai’s wind potential is Pattern Energy, which, along with land investment company Bio-Logical Capital, formed a company called Molokai Renewables. Despite the fact that the RFP has not yet been released, Pattern has applied with Maui County for permits to erect meteorological towers — known as met towers — on Molokai’s west end to study the island’s wind data.

“Molokai Renewables is preparing for the installation of up to five temporary meteorological masts, which are tall thin poles that collect data on wind speeds and direction,” said Christian Hackett, Pattern senior developer, via email. “This data will help us more accurately estimate how much clean, sustainable energy a wind project could provide to Hawaii.”

Hackett said they plan to install the towers later this year.

“We look forward to providing the community with further information before we do so,” he said.

The County of Maui planning officials contacted by the Dispatch were not sure about the current status of the met tower applications.

Norman Rizk, a 13-year west end homeowner and chair of the West Molokai Association’s (WMA) windmill committee said a Pattern official also disclosed to him the location of the company’s proposed wind turbines on Molokai. 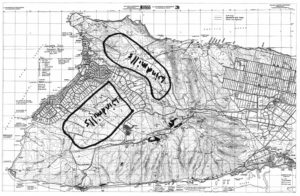 Norman Rizk drew the areas of Pattern Energy’s proposed wind turbines on west Molokai based on the description given by a Pattern official. Map courtesy WMA.

“It is just above the Papohaku Ranchlands homeowner sites, all on the west side of Maunaloa Road and to the south/southwest of Kaluakoi Road coming down the hill,” stated a letter to WMA property owners, dated June 27. “The other site will be west/north west of Maunaloa road as you begin to descend the hill.”

“I think people on the west end will have trouble sleeping because of the noise” generated by the proposed wind turbines, said Rizk. “There have been many towns that have been abandoned because of the windmills — and these are [proposed to be] right next to Maunaloa.”

The proposed land is owned by Molokai Properties Limited, better known as Molokai Ranch. Ranch officials did not return requests for comment before the Dispatch publication date, but Ranch project manager Nancy Schmicker said previously that the agreement giving the legal option for the developer to lease land if they are awarded the contract from HECO “was already signed before [new Ranch management took over] – we can’t legally back out of that.” The proposed land totals 11,000 acres.

Peggy Bond, a member of I Aloha Molokai (IAM), a group formed to advocate for community-based energy solutions, called the towers “a significant step in… [the construction of] approximately 90 47-story tall wind turbine towers on 17 square miles of Molokai.”

“Molokai has significant wind resources that could serve to meet local needs as well as provide power to Oahu,” states the Hawaii Clean Energy Initiative website. “Molokai also has sites that would be suitable for utility-scale solar power and biomass power projects… Molokai has sufficient renewable resources to supply much of its own energy needs and could provide power to meet a significant portion of Oahu’s needs.”

Yet while many Molokai residents, including members of the WMA and IAM, protest the state’s push for Molokai to supply energy to Oahu, Gov. Neil Abercrombie continues to step closer to making the project a reality.

SB 2785 establishes a regulatory structure for the installation and implementation of an interisland high-voltage electric transmission cable system and for the construction of on-island transmission infrastructure.

SB 2787 authorizes the PUC to develop, adopt and enforce reliability standards and cable interconnection requirements, as well as contract a party that will serve as the Hawaii electricity reliability administrator.

HECO’s draft RFP can be viewed at generationbidding.heco.com.

Big Wind Timeline:
2009: PUC approves plans for 200 MW wind projects to be built on both Molokai and Lanai
2011: First Wind pulls out of Molokai project, and Pattern Energy attempts to take over where they left off
July 2011: PUC rules that HECO must restart bidding process for 200 MW of renewable energy that would have been generated on Molokai
Oct. 2011: HECO released draft RFP for 200 MW to be built anywhere in the state, from any renewable energy source
June 2012: Governor signs bills that establish regulatory structure for installation and implementation of undersea cable
Late 2012: Scheduled release of HECO’s final RFP
Late 2014: Earliest HECO will choose a contractor for 200 MW and undersea cable projects
Dec. 2018: Target date for 200 MW to be generated on or sent to Oahu via undersea cable
2030: State’s goal of 70 percent clean energy