After a decade of struggles, the Molokai Veterans Center is finally completed. Photo by Catherine Cluett.

Military service members, by nature of the job, often fight for causes they may never live to see achieved.

The group of Molokai war veterans who first envisioned a Veterans Center on island in 2001 couldn’t have imagined the decade-long struggle of permitting delays, protests and a lawsuit that would follow. They couldn’t have known that 63 veterans, including project pioneer Larry Helm, would pass away before the building was completed.

They did, however, believe that Molokai would have a Veterans Center. Last Friday, their dream became a reality, as nearly 200 veterans, community members and elected officials closed an emotional and triumphant journey at the grand opening of Molokai’s Veterans Center.

“Today it’s a privilege for us as a community to support you in any way we can,” said Kahu Jimmy Duvauchelle, as he blessed the center. “My only regret is that … a few of the soldiers who started this great facility [are] not here to receive what you and I are seeing today.”

As flags were raised, speeches were given and the maile lei was cut on the building’s airy patio, a hush rested over the crowd. U.S. Rep. Tulsi Gabbard presented MVCV with a congratulatory certificate from Congress, followed by commemorative plaques from both the county and the Department of Veterans Affairs. 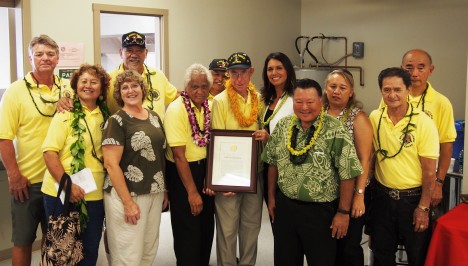 “When I was sitting here and looking at this beautiful facility, I was thinking of the warrior ethos that [is] instilled in every one of us, that I will always place the mission first,” said Gabbard, a veteran and friend of Helm. “I will never accept defeat, I will never quit, I will never leave a fallen comrade. And I know that warrior ethos has … brought this place to reality.”

Veterans said the new building, with its private offices, will give them the freedom to speak openly with visiting psychologists, as well as the ability to work more efficiently with VA offices on neighbor islands.

Outside, there’s a towering flag pole and a patio, featuring a Memorial Wall of tiles honoring veterans and donors. “I cannot express how I feel right now,” said MVCV Vice Commander John “Longie” Dudoit. “I’m so happy. It’s unreal. And it takes hard work from the people in the beginning and the people in the end, ‘cause there was a lot of veterans that were involved.”

Fourteen years ago, Molokai’s veterans had no organization or place to call their own. In 2001, veterans Patsy Bird, Wendell DeFreitas and Helm wrote a letter to the county and were able to rent a space in town across from the Veterans Park. They formed MVCV and designated their small, dark space “the bunker.”

However, the one-room space lacked privacy. MVCV Commander Sam Makaiwi remembered how visiting psychologists used to take veterans out to lunch or for walks through town to do counseling sessions.

After Molokai Ranch donated the land where the center now stands in 2004, veterans began planning for a more spacious location, aided by a $250,000 grant from the state. However, due to zoning issues, MVCV had to wait three years to obtain a Special Management Area permit from the County of Maui in 2009.

After waiting almost another year for the building permit, MVCV members traveled to Maui to protest what they felt was another unfair hold-up. Despite the Fire Department’s assurance that the location had adequate water pressure for fire suppression, the Department of Water Supply had withheld a final approval for the building permit. MVCV filed a federal lawsuit against the county in 2010 over the “lengthy and unjustifiable delays,” according to the lawsuit.

“We’re not looking for special treatment, we’re just looking for equal treatment,” said Larry Helm in 2011. He called the proceedings a “wrongful permit process,” adding he and his fellow Molokai vets felt betrayed by the government. 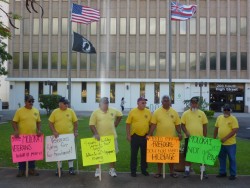 The lawsuit was settled in an arrangement of a $200,000 grant from the county in 2012, although veterans also requested a public apology that family members said they have yet to see.

“It’s too bad that it had to happen and that was the not-so-good part about the whole process,” said Helm’s wife Barbara. “… The veterans had to think out of the box in order for their voices to be heard. … They ought not to have had to fight so hard.”

Veterans finally received their building permit in May 2011 and poured the concrete foundation of their long-awaited building in October of that year. Elated and relieved members said it was a load off their shoulders and slated completion for the following year.

However, the lawsuit and ensuing court fees had cost veterans thousands, leaving them short on building funds. When Larry Helm was diagnosed with liver cancer, the community and Helm’s family put together a fundraiser in 2013 to fund final efforts to complete the center. However, Helm passed away a month later – with the center still unfinished.

“So many Molokai veterans will not be alive to be able to see its completion and use it, including me,” Helm had said.

A week before Helm’s death, Dudoit promised him that he’d get involved and see Helm’s dream realized.

Dudoit said MVCV’s Board of Directors was instrumental in completing the final slew of tasks. They chased down certificates and ensured that the wiring, water and sewage were up to county standards.

Much of the work throughout the process was thanks to volunteers, Dudoit’s wife Lorna said in February. However, with unpaid volunteers, there were no set schedules or job requirements. Contracting licensed electricians and plumbers helped move the process along more quickly.

Other veterans also got involved to honor the late wishes of friends, including MVCV board director Daniel Iaea and his wife, who dedicated nearly 200 volunteer hours to the property’s landscaping to fulfill Iaea’s promise to the late Jesse Dudoit.

“I probably knew almost everyone who was looking forward to this opening that didn’t make it,” said Dr. David Hafermann, former MVCV commander who served as the island’s VA physician for more than eight years. “I had one [veteran] who in 2005 came to me and said, ‘Doc, am I gonna live to see this opening?’ How do you answer that? Thirty days later he was gone. That has stuck in my mind. The time it’s taken—and I don’t wanna be negative about anything—that, to me, is kinda bittersweet.”

MVCV, which Makaiwi said in February is approaching 400 members, will continue to build upon a hard-earned legacy. The organization has future to pave the gravel parking lot surrounding the building, a project that they estimate will cost around $100,000. They’re also looking into solar panels for the center.

“Now it’s time to fill it and to complete the vision and to serve the veterans first,” said Barbara Helm. “… I know my husband’s super happy. It’s mission accomplished.” 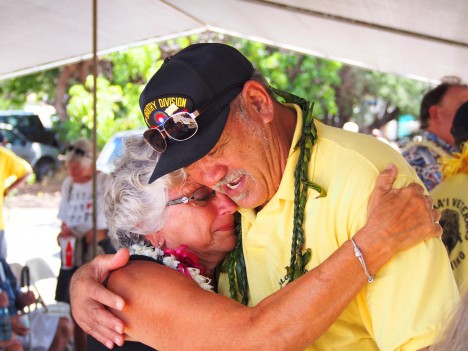 Barbara, wife of the late Larry Helm who spearheaded building the Veterans Venter but died before it was completed, shares an emotional moment with MVCV Vice Commander Longie Dudoit. Photo by Catherine Cluett.