A farm to table approach is coming alive at Hotel Molokai’s Hula Shores restaurant under the leadership of Kitchen Manager and Oahu native Gene Pike. With Kumu Farms vegetables, Keawanui shrimp, Kaupu Farms fresh poi and many other Molokai-grown ingredients, patrons can now enjoy fresh, new favorites, while local farmers have an outlet to showcase their products.

“I want to integrate more Molokai products into our menu, and we can do that on an almost daily basis,” said Pike, who has lived in San Diego for the past 20 years and worked in the restaurant industry his whole life. 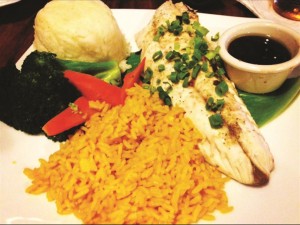 Pike, who took on the position of kitchen manager last December, has made some radical changes to the way Hotel serves food. With a menu that can change daily to reflect available products, and specials built around Molokai produce or the day’s catch, Pike said the restaurant is attracting former patrons, who are coming back to try the new grinds.

The old menus, which Pike said “might have been printed in the 70s,” featured generic entrees and off-island ingredients. “Why would anyone come to Molokai to eat chicken parmesan?” he wondered.

The new menu has also lowered prices for both patrons and the restaurant. By buying local, and in smaller quantities, Pike said the changes save money on transportation and storage costs. That translates to lower prices on some of the entrees.

“I didn’t want Hotel to be a special occasion destination,” said Pike. “I want [locals] to be able to eat here more often.”

“In the past, [small farms] may have been afraid to come because they can’t supply enough,” said Pike. “But five pounds of green onions from Arce Farms in enough [for one week.]”

Pike said the shift has also created a better kitchen atmosphere for staff.

“I’ve challenged young cooks to come up with their own ideas – it’s spawned some creativity,” explained Pike.

Hula Shores Cook James Gorospe, born and raised on Molokai, agreed that creativity has come to the forefront.

“I’ve been cooking ever since I was 10,” he said. “I love it – I [now] cook based on what I grew up with, just upgraded.” He added that all the specials he’s made have been hits.

Pike’s goal is to eventually use 100 percent local products. He hopes more Molokai farmers will come forward with their produce, a process that’s been happening “little by little,” he said.

Just last week, Pike met with the slaughterhouse to use Molokai beef for burgers and rib-eye steaks, which will be coming soon to the menu.

Pike called his new position “a match made in heaven” – the restaurateur had his eye on moving to the island for several years. Along with mentoring the kitchen staff, Pike said he hopes to offer educational opportunities for local youth – like kitchen and dining internships for Molokai High students.

If you’re a Molokai farmer and would like your produce featured on the Hula Shores menu, contact Pike at his direct line, 808-660-3409.