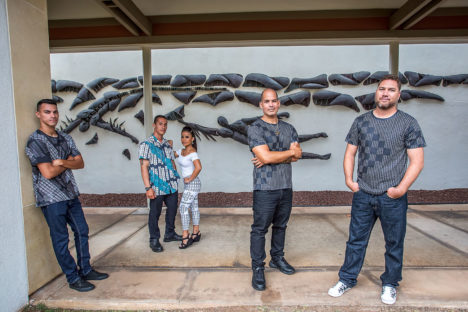 Molokai clothing designer Kanoelani Davis is bringing her fashion label PoMahina Designs to New Zealand this month to compete at the Pacific Fusion Fashion Show on Aug. 26. The show features emerging Pacific designers and Davis was selected to be among them.

“Since our first show last year, many designers have reached out because they believe in our philosophy and view the opportunity as a great way to build their confidence and test ideas beyond the traditional Pacific design category,” said Event Director and fashion stylist Nora
Swann. “This year we’re pleased to confirm eleven emerging designers from Aotearoa, Australia, Samoa and the United States of America for the competition showcase.”

PoMahina Designs, a home-based business started on Molokai by Davis, draws inspiration from Hina, a Hawaiian goddess that is the mother and essence incarnate of Molokai. Davis, a single mother who has overcome many hurdles in building her own business, is also a kumu hula, educator and activist. In her designs, Davis incorporates natural elements, patterns and layers that embrace and intertwine with the work of her kupuna.

“It is a deep honor that this large, elite fashion organization found us on our tiny island a world away, and avidly wants us to be a part of their 2017 show,” said Davis. “We have gladly accepted this opportunity and see it as a chance to expand beyond our Molokai shores. We foresee this occasion will bring recognition to Molokai and all of Hawaii, not only for its wearable arts and culture, but also for visitors and businesses alike.”

PoMahina’s presence in fashion shows started in 2002. Davis modeled in the 2015 MAMo Wearable Arts Shows on Maui and Oahu, then became a runway co-artist in 2016. Earlier this year, she became one of the main artists in MAMo Oahu and MAMo Maui, offering the opportunity to highlight her designs on the runway.

“…Kanoelani is creative, her gorgeous products are Pacific infused, she’s pasifika and she is an exciting upcoming fashion designer,” said Swann. “Not only does she create pacific infused clothing but also makes shoes and fashion accessories, wow! This excited us as she ticks all our boxes for the type of designers who we invite to showcase in our show.”

Davis is fundraising to make the trip to New Zealand possible. For more information on how to support her efforts, visit pomahinadesigns.com/.