Molokai was once known as “Molokai `Aina Momona,” or the abundant land, providing plentiful food for a population many times its current size. While there are still many farmers and crops on Molokai, the economics of farming are making it challenging to provide for the community the way ancient Hawaiians once did. Thus, many island farmers have turned to exporting to make the numbers work.

A recent study by nonprofit Sust`ainable Molokai has found that the economy of scale – or the cost advantage of producing larger amounts – plays a key role in the success of local farmers.

Molokai stores can purchase bulk produce from off-island distributors and sell it for a lower price than it would cost Molokai farmers to break even, explained Williams. Unfortunately that makes it economically difficult for farmers to justify selling their produce locally, even though stores are supportive of selling Molokai-grown products, she said.

For many Molokai farmers, exports supplement the products they market on Molokai.

“I prefer to get the bulk of accounts from off-island so I can bring money back to this island,” said Molokai taro farmer Tubz Kalipi. “I try not to pick up the small markets. If you’re going to be out there in the field, you try not to pull 20 pounds. It’s [more cost effective] to pull 200 pounds.”

Kalipi started farming full-time about four years ago. He said he wanted to take advantage of his homestead land, but because former pineapple production had left toxins in the soil, he said he had to build up the nutrients in the ground first.

“You need to let the land heal itself,” he explained. “It’s a challenge. You have to love this land, and the thing going produce fruits for you.” 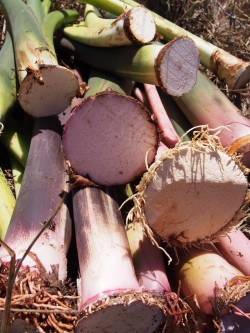 Kalipi said now he supplies about 1600 pounds of taro per month to Oahu and 900 pounds to Maui. His product goes to schools, hotels and markets. On Molokai, he sells taro leaf and about 240 pounds of poi weekly to regular customers.

“The takeaway is that for a population of 7,000, we have to have exports as our financial foundation, and then we can still provide services on Molokai,” said Williams, adding that many of Molokai’s successful, larger farms follow this principal, such as Kumu Farms, L&R Farm specializing in Molokai sweet potatoes, and others.

Sust`ainable Molokai’s Food Hub program was launched last year with the goal of supporting local farmers and serving as a connection between farmers and markets. Those markets could be on or off-island and include stores, restaurants, schools and other venues. While economic realities have impacted the extent to which local food is available in Molokai stories, opportunities continue to open up for Friendly Isle produce off-island.

For example, Williams said they have a relationship with a business on Oahu that makes a fruit-based frozen dessert similar to ice cream.

“They will take all the lilikoi and dragonfruit we can give them,” said Williams, adding that if Molokai residents or farmers have those two fruits in excess, to contact Sustainable Molokai. “We’re hoping we can help farmers find these off-island markets so they can continue to grow here.”

While a focus on export makes economic sense for farmers, Sust`ainable Molokai is also trying to encourage local consumption of Molokai-grown food, and students are among those benefitting from that goal. Recently, several federal and state initiatives have been aimed at decreasing the restrictions to get locally grown produce into schools. Williams said this issue was part of the focus of the so-called Hawaii farm to school bill that was signed into law in July.

“Schools here want local, it’s just figuring out how to change the system,” she explained.

It’s difficult to become a local vendor under the National School Lunch Program and School Breakfast Program, which provides federally subsidized meals, said Williams. But she said there are few hoops to jump through under the national Fresh Fruit and Vegetable Program (FFVP), which provides healthy school snacks at schools with high percentages of students meeting free or reduced lunch qualification, for which all Molokai schools are eligible.

Williams said while unfortunately, most Molokai elementary schools missed the deadline to apply for FFVP this year, Sust`ainable Molokai will be a vendor under the program for Kaunakakai School, providing locally grown produce to supplement the snack program.

“I believe this program is a win-win situation for it benefits our children and adults by giving them the opportunity to eat fresh, homegrown, local fruits and vegetables rather than waiting for the barge to bring it over to us which may take over a week after harvesting,” said Kaunakakai Principal Janice Espiritu.

Espiritu said she also looks forward to field trips to the farms that provide their produce and bringing in guest speakers on healthy eating.

“Food Hub provides centralized service so schools don’t have to work with farmers individually,” said Williams. “…FFVP is so awesome because we can pay farmers a fair market value for produce, plus you don’t have to pay shipping [to bring in off-island food].”

Starting in October, Sust`ainable Molokai will be supplying the school 350 servings of local produce twice a week, and Williams said they are looking for farmers to help them source as much local fruits and vegetables as possible.

While the economic realities of farming can be difficult on Molokai, Williams said she has noted progress in the form of shifting attitudes to favor local produce, and Sust`ainable Molokai is continuing to assist in forming business links.

“Our goal is to connect people to markets so they’re able to be financially sustainable and keep a piece of it on Molokai,” she said.