Molokai’s Todd Yamashita has authored his first children’s book, bringing together his passions of Hawaiian culture, his two kids, environmental conservation, intergenerational relationships between keiki and kupuna, and his wife’s fishpond restoration nonprofit, Ka Honua Momona. “Uncle’s Magic Thrownet,” colorfully illustrated by Jamie Mechel Tablason in hardcover, is available for sale throughout Hawaii and on Amazon.com.

“Writing a children’s book has been a dream of mine for a long time,” said Yamashita, who also owns The Molokai Dispatch newspaper. “Children’s books should be simple and fun, and especially now that I have kids of my own, it’s a unique opportunity to introduce important values and themes to the next generation.”

Uncle’s Magic Thrownet tells the story of a kupuna who throws his net for fish and a keiki who discovers all is not as it seems with uncle’s old net. Through a puka in the net, Uncle teaches the boy a lesson about conservation, generosity and discovery. 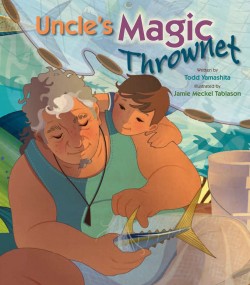 “I think there’s a sense of pride in anyone being able to provide for their family, from the breadwinner of a family to a fisherman,” said Yamashita. “A lot of times, that pride is associated with how much you can take. In reality, there’s a much higher level of providing for yourself and your community, and that’s being able to do it sustainably.”

The story is inspired by Uncle Mervin Dudoit, a fisherman, kupuna and teacher at Ka Honua Momona, a nonprofit dedicated to ancient fishpond restoration and cultural education. Once a commercial diver, Dudoit said he would bring in 600 pounds of fish per day to sell to off-island markets.

“I used to dive so much, we used to send out fish six days a week,” he said. “For years we did that.”

A young boy in the community used to tell him, “You’re catching too many fish, Uncle.”

“That really hit me – I always think about that,” said Dudoit. “He was right.”

He stopped fishing commercially, and he now works to educate youth on responsible fishing practices.

“Now I always tell the kids, ‘only take what you need,’” he said. “I share the message about fishing because if you don’t teach the kids, they’ll never learn… Hopefully the book can get [that message] to kids.”

Yamashita said Dudoit is an appropriate hero for the story because the leaders we look up to aren’t always perfect but they are capable of change, and Yamashita calls Dudoit a perfect example of that.

Yamashita said he hopes the book inspires this dialogue between the younger and older generations.

“I hope it gets across the idea that we can all provide for ourselves and our families in a way that’s not only sustainable but meaningful to our culture and our communities,” he said.

Uncle Merv’s net really does have a puka in real life.

“Kids say, ‘Get puka!’ and I say, ‘So what?’” Dudoit explained. “It’s good to not catch everything today… What about tomorrow?”

Adding to the story, rich illustrations by Tablason bring life and beauty to the characters, according to Yamashita. Tablason was an artist he admired, and he said finding the right illustrator was one of the most important aspects of publishing the book for him.

Yamashita said he also wanted to highlight Ka Honua Momona and do something for the organization. The nonprofit was able to purchase books at a discount and sell them as a fundraiser, he said.