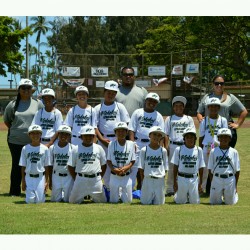 Molokai played in the Hawaii Little League District III ages 9 and 10 All-Star Tournament last weekend in Kihei. Central Maui beat Molokai 5-3 in the opening game tournament Friday. But they came back strong against West Maui on Sunday in the consolidation bracket, winning 8-7. They were scheduled to play Central Maui on Monday.

The double-elimination event ran through Wednesday, with the winner advancing to the state tournament, scheduled for June 18-22 on Oahu.