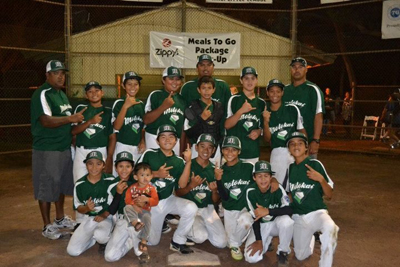 The 13 boys of the Little League Majors, ages 11 to 12, came off the Maui Ferry Thursday night celebrating as District 3 champions. Having defeated defending state champion Central East Maui at the district tournament at Kalama Park, the Molokai All-Stars knew they would be headed to the state tournament.

This is the first time Molokai has made it to the state level since 2006, and it wasn’t easy.

After suffering a 13-1 loss to Central East Maui on Wednesday and the district championship title hanging in the balance, no one knew if the Molokai All-Stars would be able to turn things around.

“Coming off a 13-1 defeat, we knew we had to dig down and prepare the kids going into the second game,” said Coach Ilika Kaahanui, who has coached the team for the past six years. He recalls inspiring the boys by drawing off lyrics from the song “Not Done Yet” by reggae band SOJA.

One of the team’s saving graces that night came in the form of Kairos Torres-Umi, who hit a two-run, opposite-field homer in the first inning. When Kaahanui switched him to pitcher, he finished the game with a five-hitter, boasting eight strikeouts and no walks over 83 pitches in the game. Molokai won the championship game 2-1.

For the state tournament, Kairos plans on working on his hitting, pitching and fielding. He said he feels good that the team won district championships, but is a little nervous for states.

“[Kairos] is a very good player,” said Kaahanui. “He is a good hitter and he pitches with a lot of control.”

Another honorable mention of the tournament was Kekiakea Maliu, who plays catcher. He was really strong behind the plate, stopped blocked balls, and was able to get outs on past balls, said Kaahanui.

“All our practice paid off,” said Assistant Coach Scottie Rapanot Jr. “The boys showed everybody what they could do [at District Championships], hopefully they do the same in state.”

The boys will advance to the state tournament in Kailua, Oahu from July 20-25. They will need to win three games at the state level to advance to Western Regionals, which will be held in California.

The Molokai Little League 9-10-year-old team also took their game to Maui last month, but fell one game short of qualifying for the state tournament.