Molokai’s Little League All Stars fought for the district champion title June 25, taking on teams from across the county in the first tournament Molokai has hosted in seven years.  But these 11 and 12-year-olds are more than just baseball players; they are local heroes, bringing the community together one swing at a time. 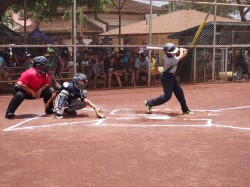 Molokai’s Micah Calairo-Nakagawa swings during his team’s fourth-inning win over Lanai during the Little League tournament on Molokai. Photo by Catherine Cluett.

“These 14 individuals – young men and women – took on a great challenge,” said Molokai Little League President Minky Hoopai Young. “They were looked at like warriors, and they battled really hard.”

They battled on the home front, allowing the community to see their All Stars in action. For seven years Molokai was neglected as a tournament host, but after a restructuring of the league under Young’s new leadership, the championship games returned to Molokai.

Surrounded by their community, Molokai’s 11 and 12-year-old All Stars came in second in the district after a 0-8 loss to Central East Maui Tuesday, June 25. Though the team struggled to make a run in the final game, they held back Central East Maui in several innings with solid fielding. And despite the scoreless finish, the young athletes of Molokai kept their spirits high.

“My favorite thing about it is having fun,” said All Star Chevy Augustiro, adding that he thought they would win the game, but he wasn’t disappointed. “It’s just a game; we can come back next year and try again.”

Hoopai Young said this positivity is what gets a player on the All Star team. The All Star committee selects the team based not only on season stats but also on attitude on and off the field. Often a coach will recommend a solid player who is All Star material. Hoopai Young said this year’s selections are fun to be around and have a positive outlook on baseball.

Augustiro, for example, knew what attitude to take when Molokai won its first tournament game Saturday, June 22 with a 10-0 finish against Lanai.

“It was exciting, but at the same time we have to stay humble,” he said. 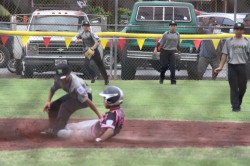 The 11 and 12-year-olds were not the only Molokai Little Leaguers battling for titles recently. The Junior All Star team of 13 and 14 year olds, and the Senior All Stars – 15 and 16-year-olds – both went to Maui June 28 for their district tournaments. Molokai Juniors closed their post season with a 0-12 loss against Kihei on Friday, June 28. This came after a 4-10 loss to Central East Maui for their first tournament game and a 21-0 win against Lanai Thursday.

Molokai Senior All Stars won against Upcountry Saturday with a 5-4 finish. The victory came after Friday’s 0-6 loss against Central East Maui. They played Central East Maui again Sunday. The score was unknown at press time.


The tournaments marked the end of this year’s Little League season on Molokai. And though none of the All Star teams brought home a title, they finished with a lot of pride in their accomplishments. For Hoopai Young, these accomplishments go beyond the field. This was her first year as president, and she restructured the league to create more unity across teams.

Hoopai Young explained that before this year, teams were separate clubs that chose their own players and acted as individual entities.

“Now the league drafts kids and puts them on teams evenly so no one team is dominating,” she said. “Having clubs 30-something years ago may have worked for them, but times have changed. Molokai is unique and we have to come together as one… to take on challenges.”

Hosting the tournament on Molokai was also a big accomplishment for Hoopai Young. She did not know why Molokai was not home to a tournament for seven years, but her goal as president was to have an Molokai All Star team compete on island. She said taking one team off-island for games costs about $6,000. The league now has that money to go toward other expenses, and Molokai has an economic boost from hosting other areas. Plus, there is the community support that comes from competing in the team’s hometown.

As many of their teammates are taking a break from baseball, Augustiro and fellow All Star Jayz Paleka-Wright are playing on. They have been invited to join Maui teams for competitions on Oahu.

“I’m going to play with Maui guys this week and practice for Oahu,” Paleka-Wright said. That is just his short-term plans, though. This Molokai All Star already has his sights set on a big future, guided by his love for baseball.

“Hopefully I’ll make it into the majors,” said Paleka-Wright.